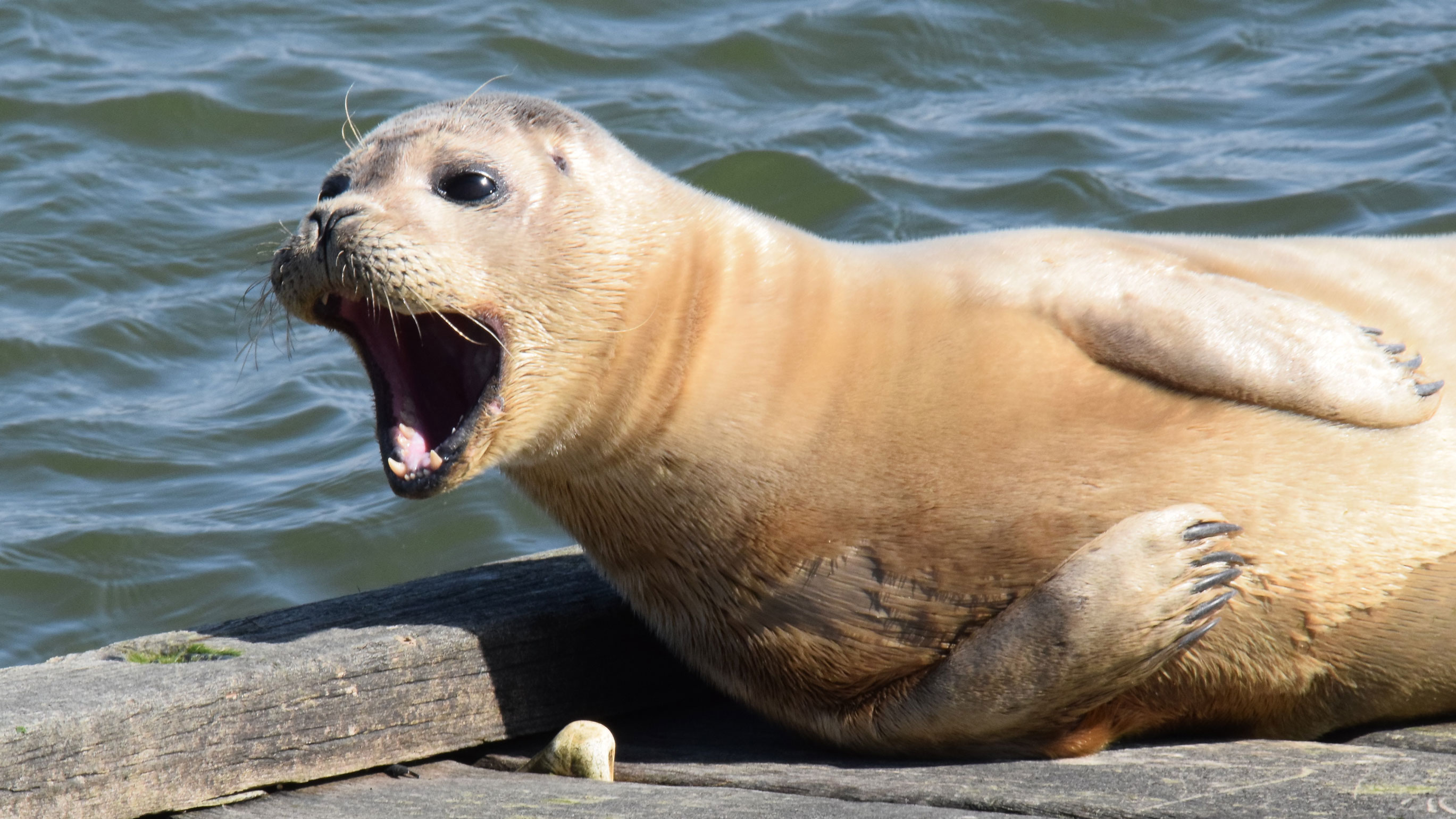 22 October 2019
A small Arctic bird called a Snow Bunting, Plectrophenax nivalis, made a surprise visit to the far eastern end of Shoreham Beach where it stayed in one place on the pebbles and grass, continually feeding on seeds with its yellow beak. It seemed unperturbed by the frequent passing lorries. Photographers could not get close because of the temporary metal fencing. Snow Buntings are a very scarce winter visitor and passage migrant to the Shoreham area.
Previous 2912 report 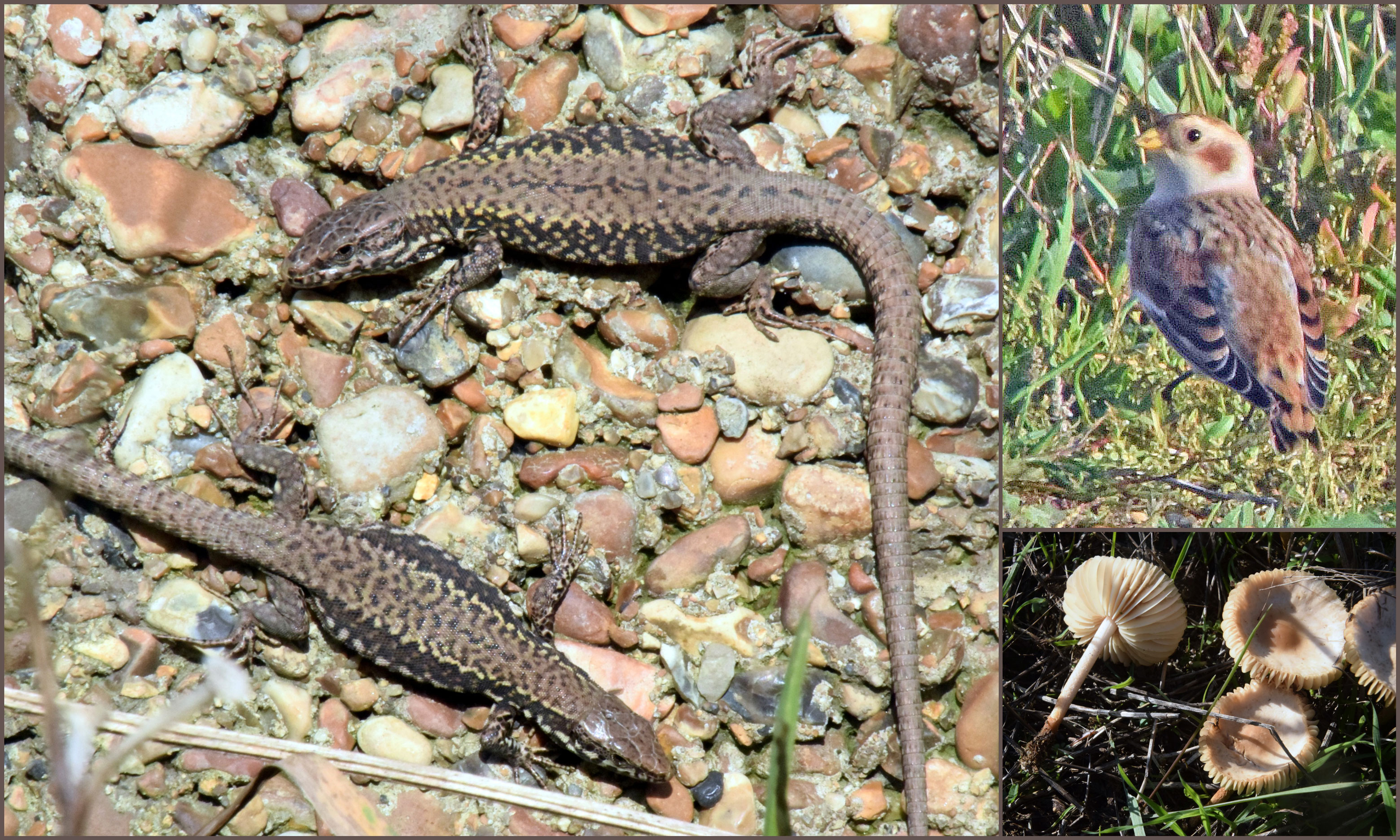 Seventeen Wall Lizards, Podarcis muralis, were easily seen on and around the carnot wall of Shoreham Fort in the calm sunshine. All but three were large adult lizards and I expect there were many more in hiding.
There were about forty familiar but unidentified mushrooms on Silver Sands above the high tide limit. I think these mushrooms are Marasmius oreades? 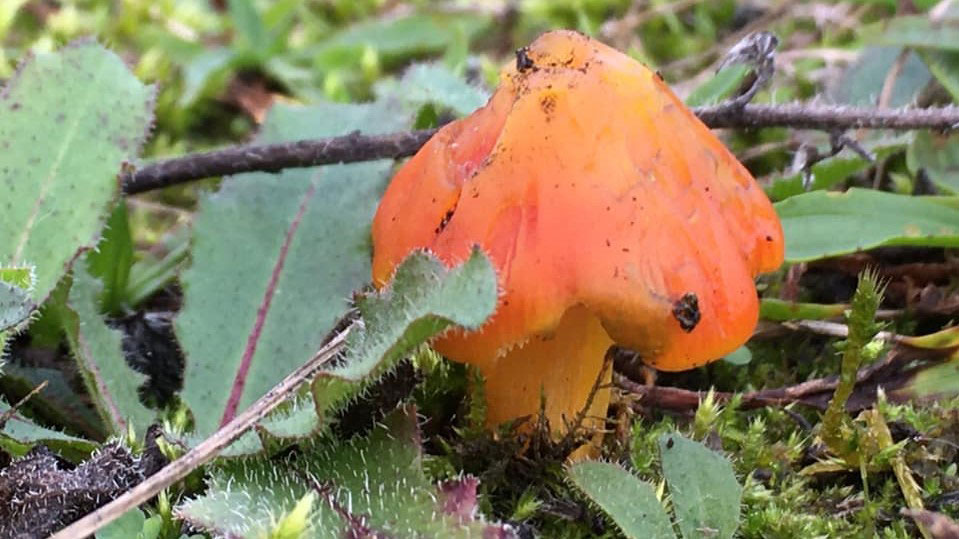 This is one of a small group of Dune Waxcaps on the Widewater flood plain.
Adur Waxcaps

24 September 2019
A Dolphin stranded alive at Soldier's Point near Shoreham Harbour entrance on the high equinoctial spring tide at 1:00 pm was helped back into the water by volunteers.

8 August 2019
There were over a hundred Childing Pink in flower and even more dead heads at Silver Sands, with frequent Hare's Foot Clover. Wall Lizards were lively on the the carnot wall of Shoreham Fort, In the sun the only observation remotely newsworthy was a Hummingbird Hawk-Moth flying along the south-facing wall of Shoreham Fort. Even this had been seen more than once in previous years.

16 July 2019
Two pods of dolphins were seen off Widewater beach, Lancing just before sunset (8.30 pm). The first pod of four to six dolphins were seen feeding three or four miles out from the western end of Widewater and travelling westwards. Simultaneously, another pod of four to six were seen to the south-east (east of the last wind turbine) breaching and swimming eastwards amongst the net marker buoys at the same distance from the shore. The sunset was followed by a Partial Lunar Eclipse that started about an hour later. 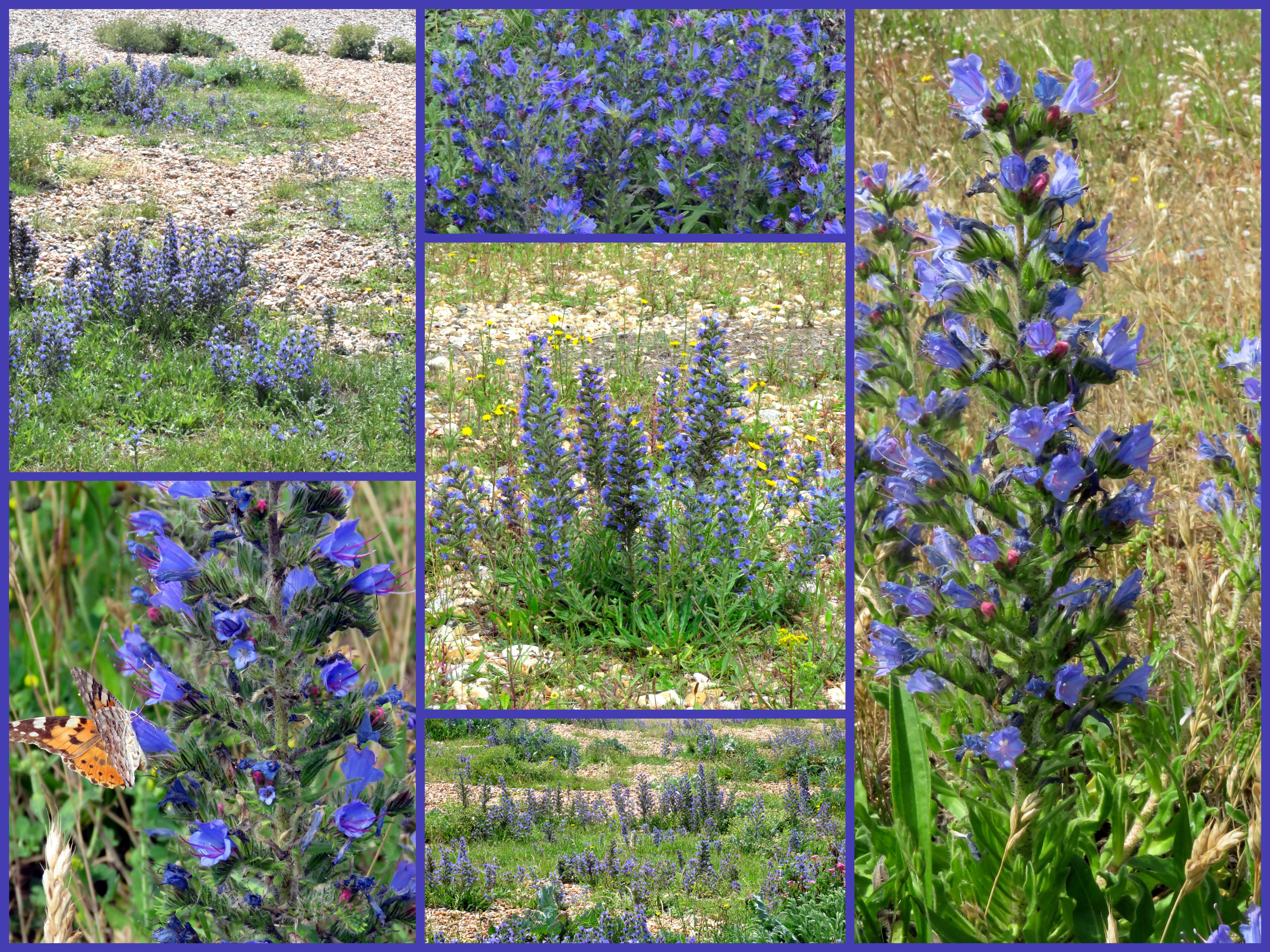 Viper's Bugloss had taken over as the dominant plant on the shingle above the high tide ridge on Shoreham Beach West, its blue spikes exceeding all the other vegetation by mass. On a humid breezy afternoon, on the Widewater flood plain, one spike was visited by my first definite Painted Lady Butterfly of the year. 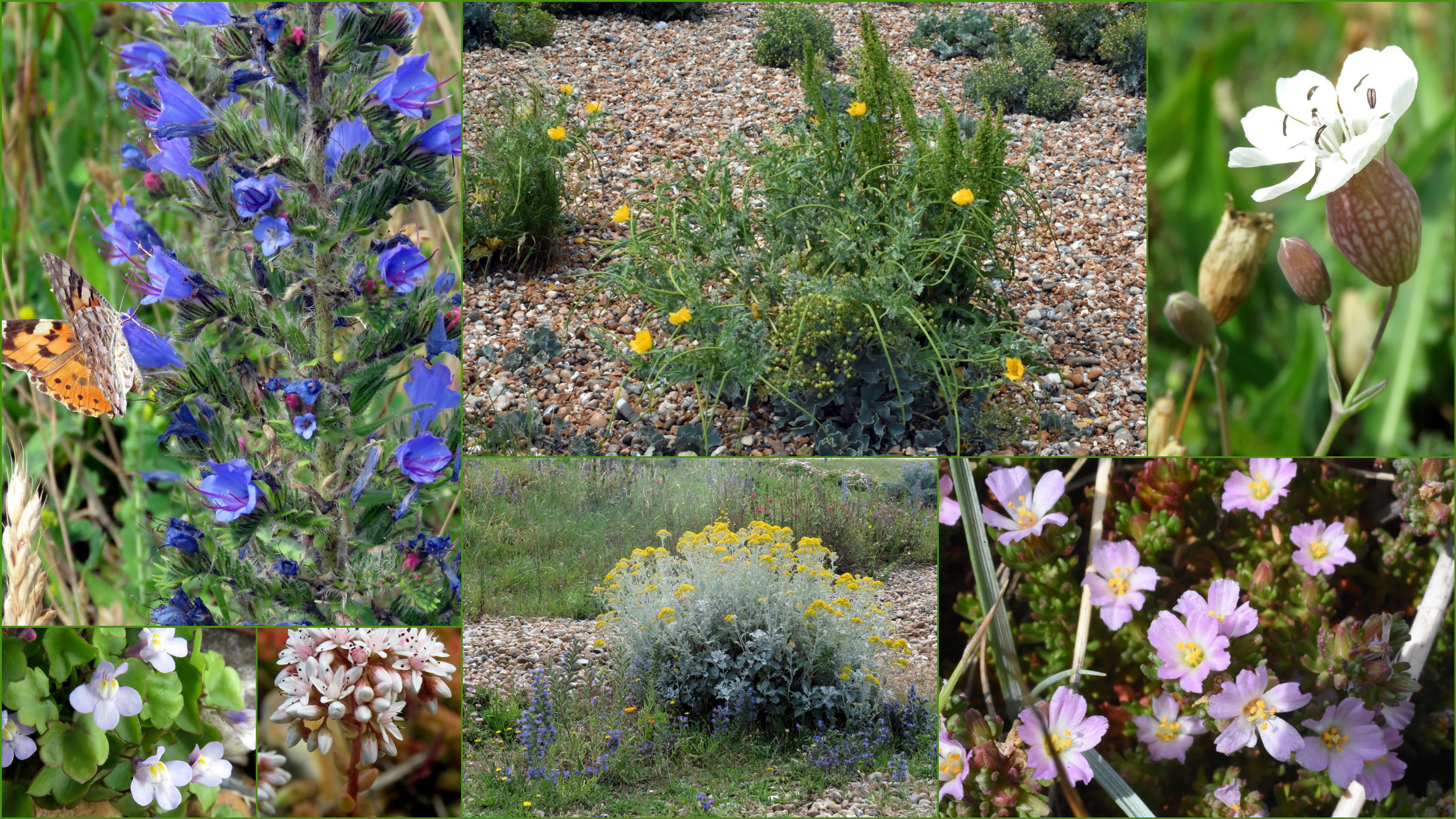 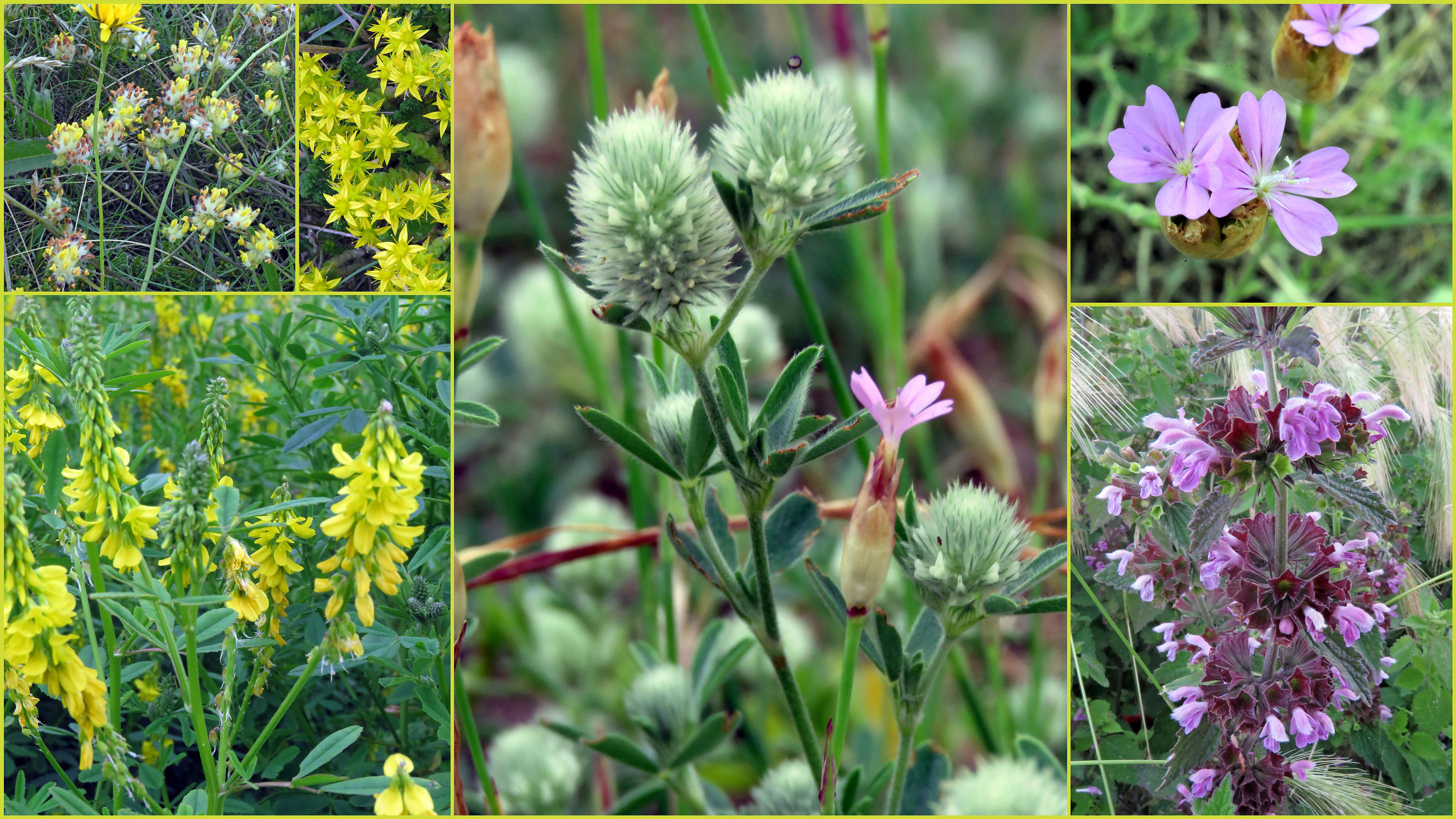 There were well over a hundred Childing Pink flowers amongst the Hare's Foot Clover on Silver Sands, Shoreham Beach. Great Lettuce and Fennel was growing nearby, but had not yet flowered. 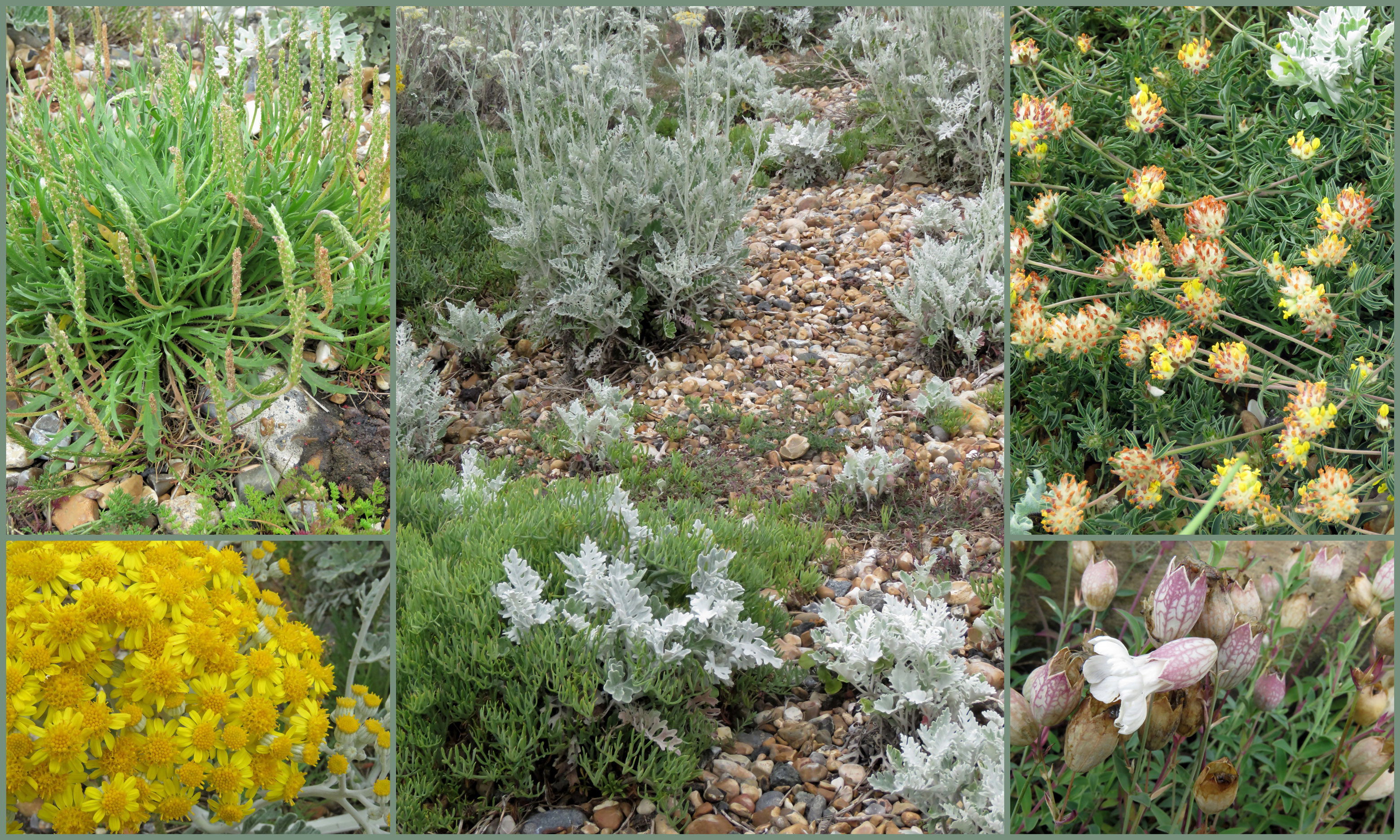 Southwick Beach is submerged on a high spring tide and the sea pounds against the concrete of the Shoreham Harbour private road. Terrestrial flora is mostly settled in cracks in the tarmac and small patches of shingle landward of the harbour wall. On a breezy rainy afternoon, the dominant species was the newly flowering Silver Ragwort in excess in bulk of all other vegetation but with notable amounts of Yellow-horned Poppy, new growths of Tree Mallow, leaves of Rock Samphire and Sea Kale, straggly Sea Beet, the last flowers of Sea Campion, patches of past their best Kidney Vetch, clumps of Buck's-horn Plantain, swathes of Thrift on the shallow soil in front of the beach huts, and a few other common waste ground plants. 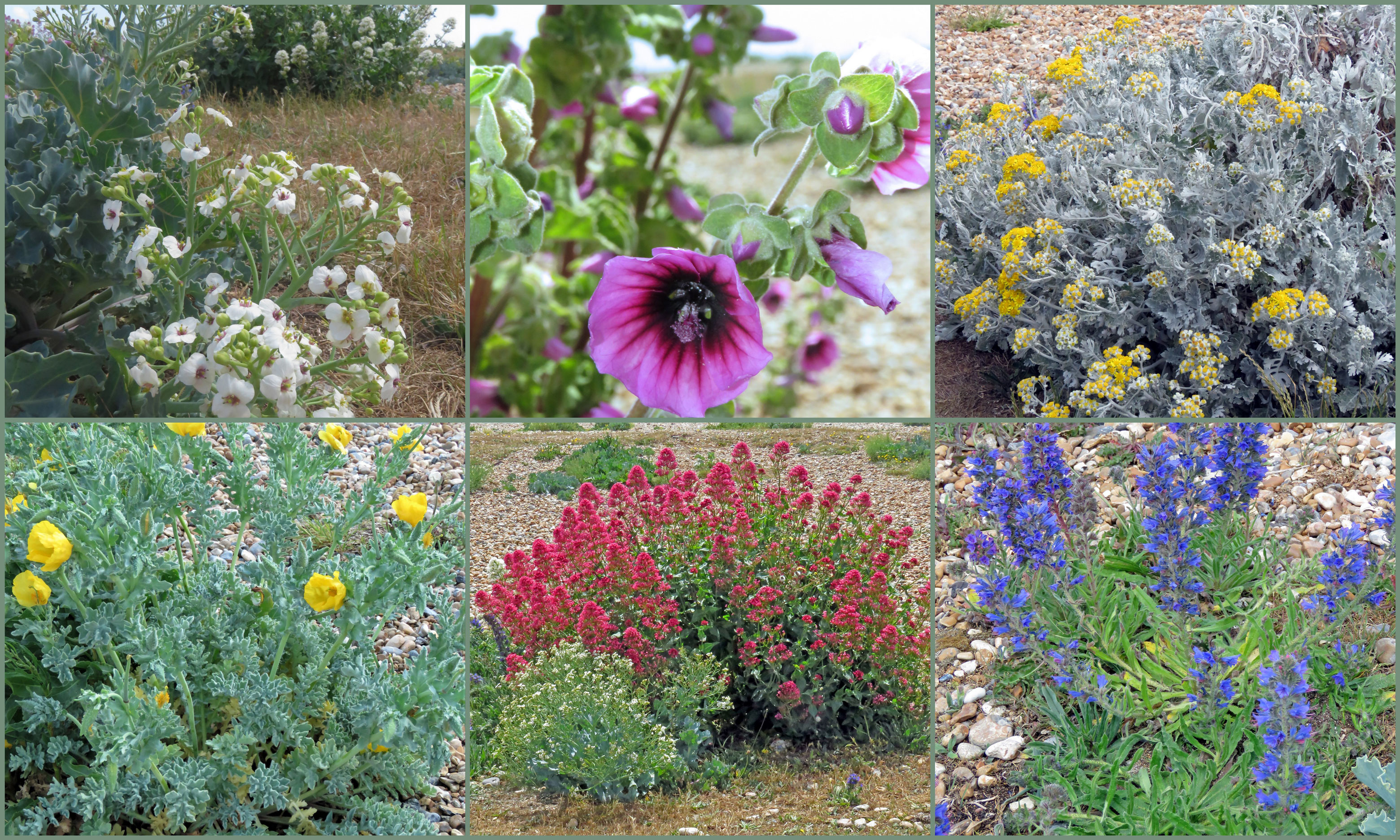 The sea pushes the pebbles up to a ridge at west Shoreham Beach, with a gradual reverse slope down to the road and houses. This reverse slope is stable (not battered by the waves) and supports a flora of large colourful shrubby plants: Sea Kale, Tree Mallow, Silver Ragwort, Yellow-horned Poppy, Red Valerian, Vipers Bugloss and Hoary Cress in flower, as well as Slender Thistle and Common Poppies. 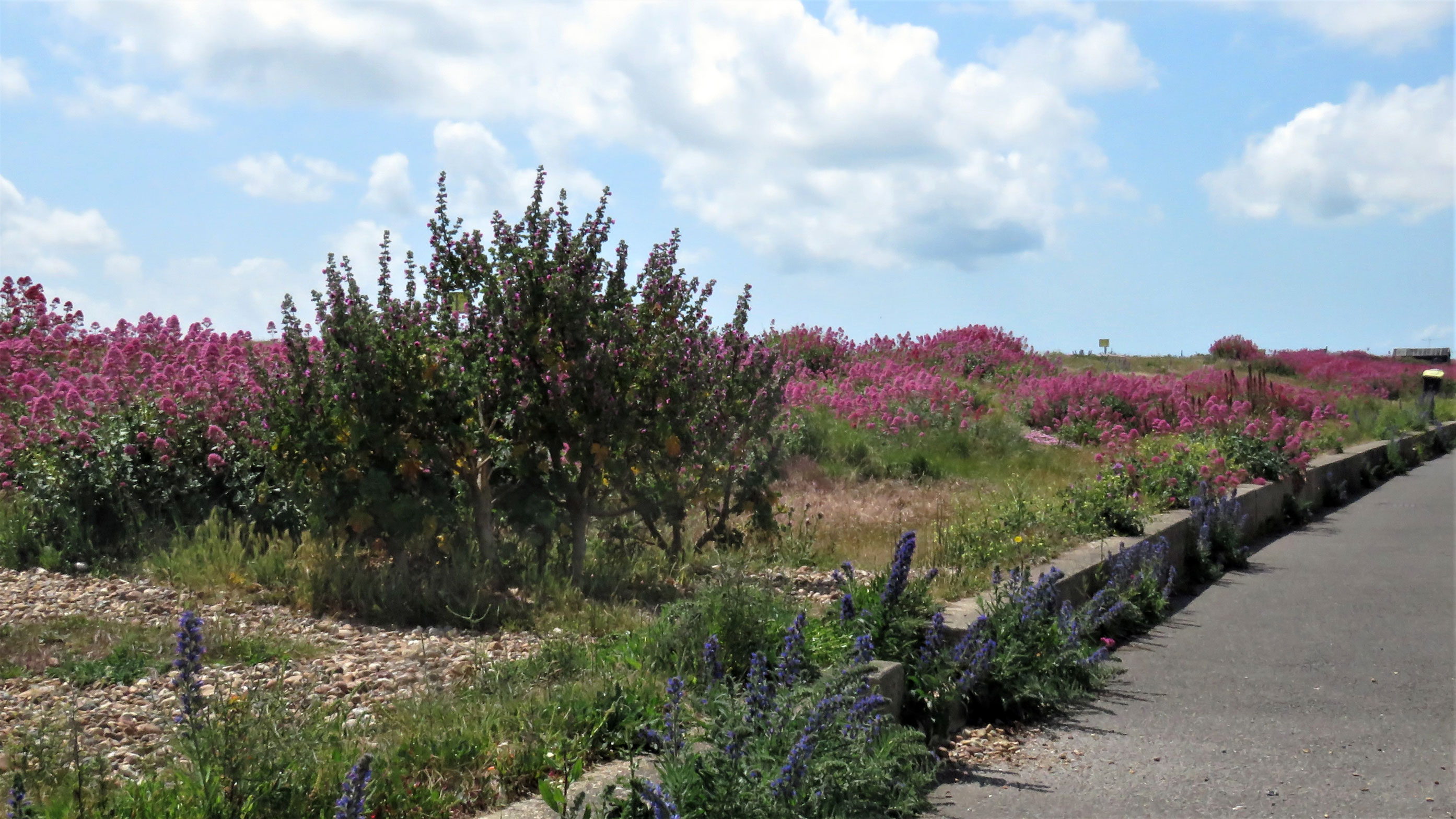 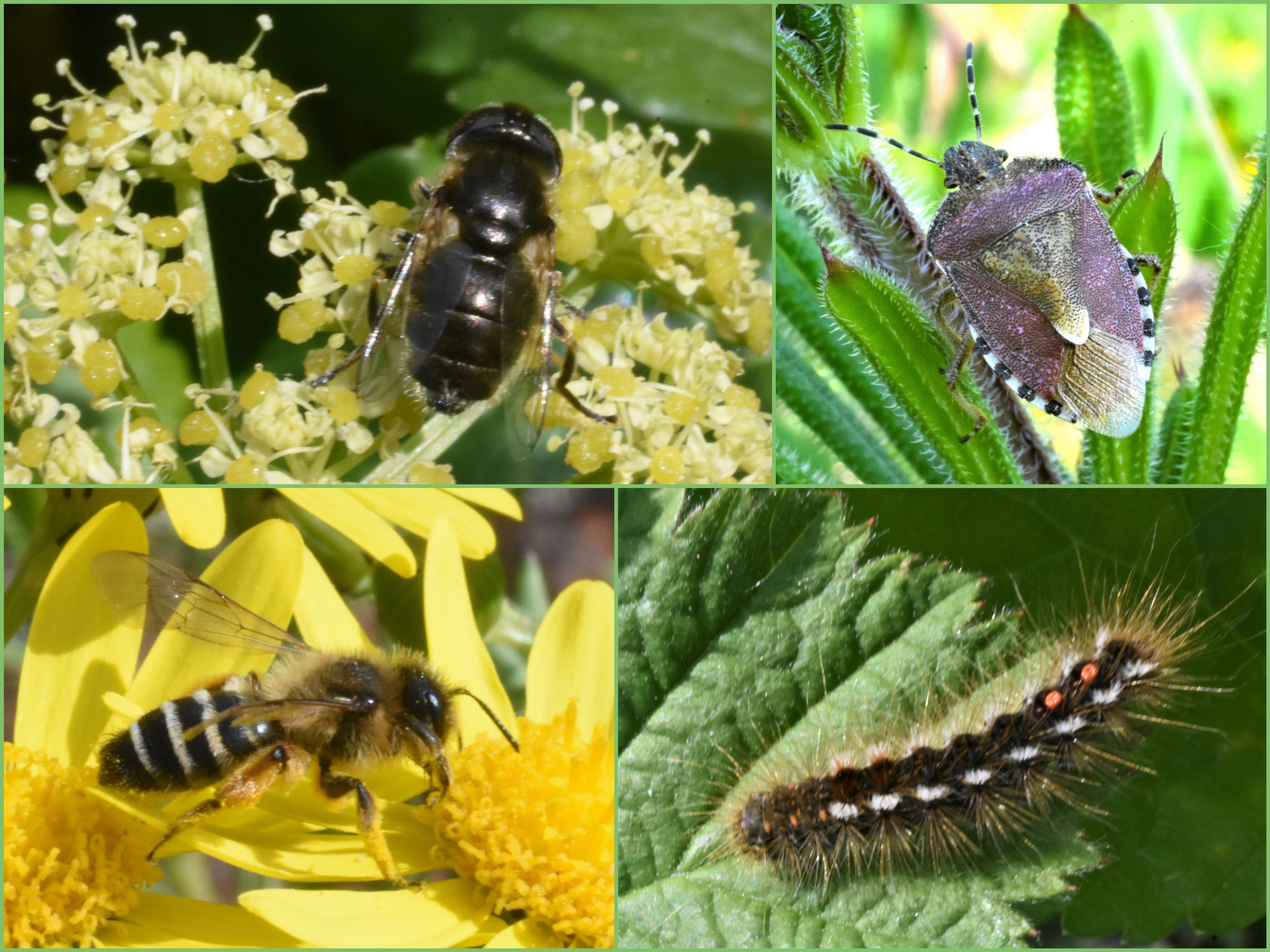 Fauna on the Widewater flood plain

A colourful moth amongst the Red Deadnettle and other dense vegetation on the Widewater flood plain was identified as my first ever Ruby Tiger Moth, Phragmatobia fuliginosa. It was strongly inclined to hide and I could not get a photograph. I underestimated the Brown-tailed Moth nests before and I counted at least twenty on the Blackthorn. I also spotted a Hairy Shield Bug, Dolycoris baccarum.
Adur Moths
Adur Bugs 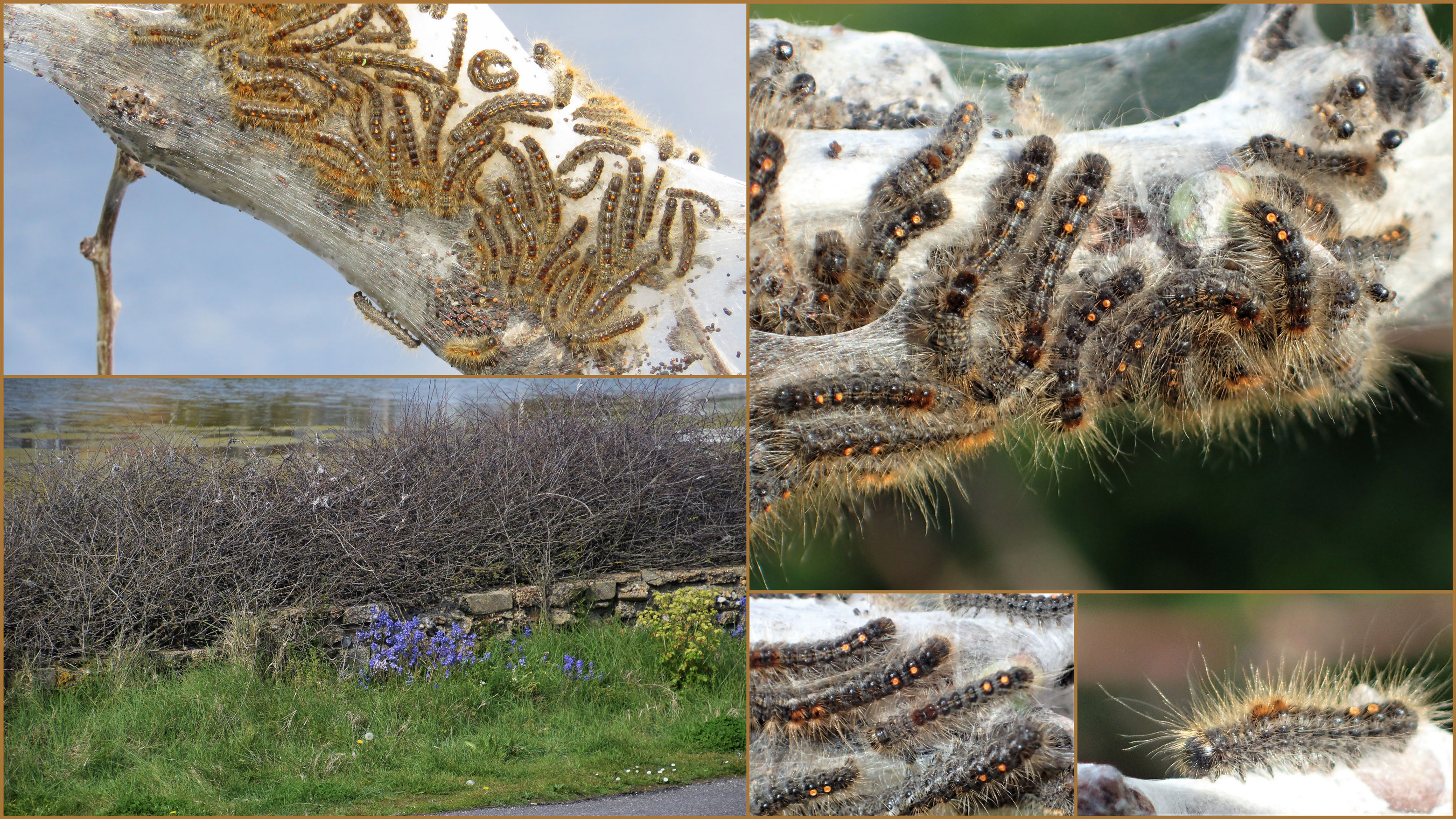 By the Widewater car park, the Blackthorn showed no trace of flowers or leaves and the adjacent Hawthorn was in leaf and budding. It was on the Blackthorn mostly that the Brown-tailed Moths had built about a dozen nests housing scores of caterpillars which will feed on the interlocking Hawthorn. 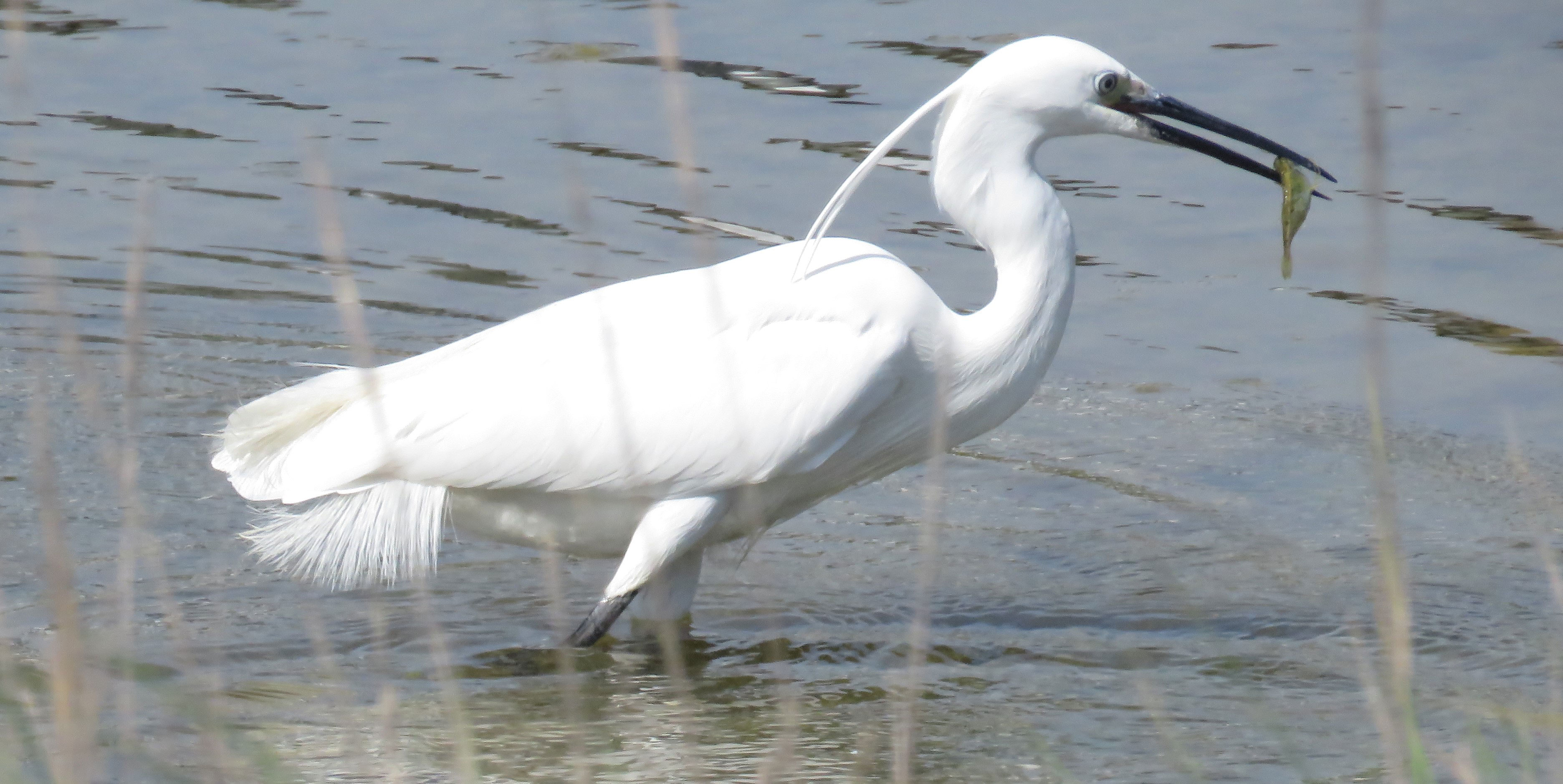 3-spined Sticklebacks could be seen darting to in the surface water of the lagoon on a sunny afternoon. And the Little Egret spotted one as well. 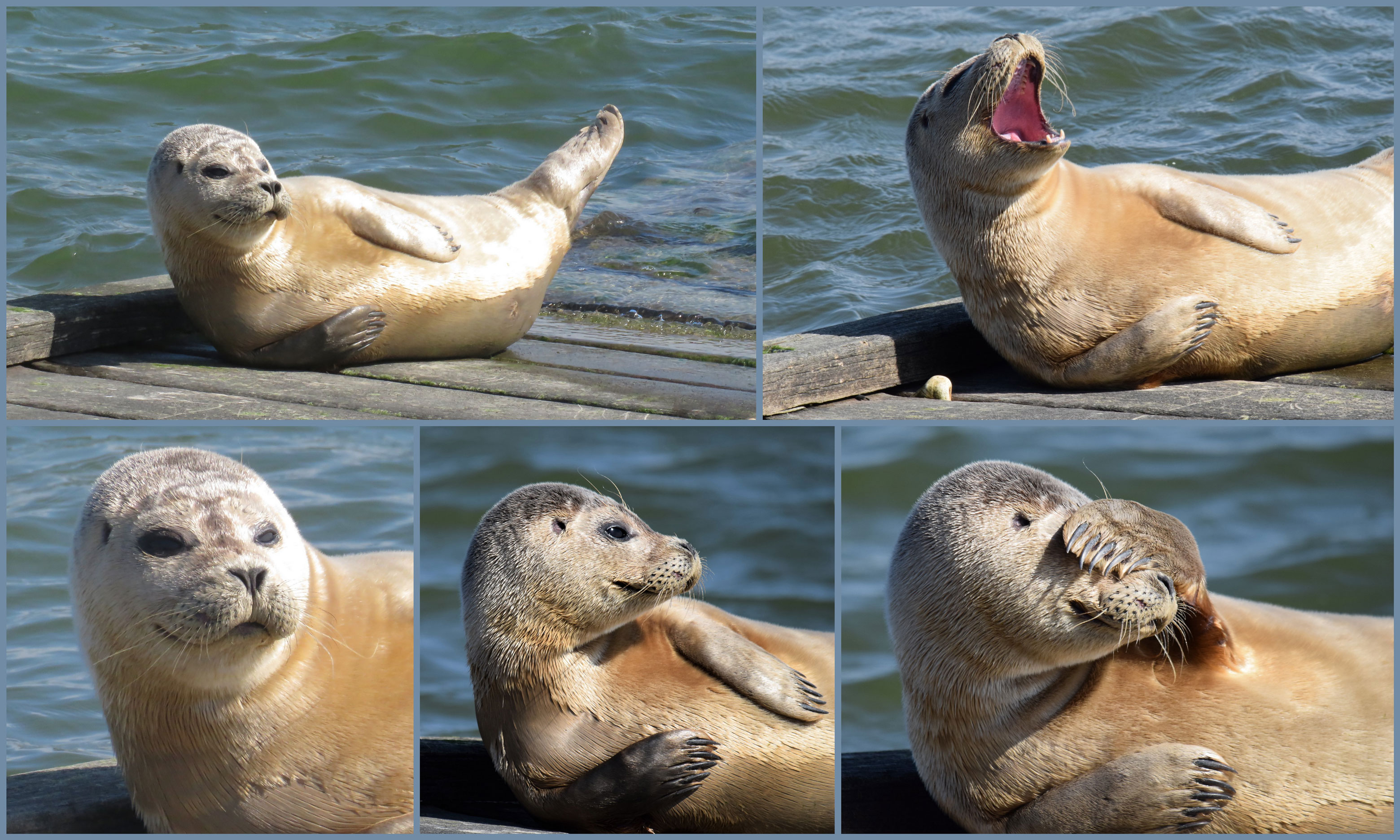 As the sun cast strong shadows, the local young Common Seal hauled on the slipway on Kingston Beach and just lazed around at high tide for at least a couple of hours in the afternoon. In the chilly north-east breeze, the seal attracted about a dozen visitors at any one time including children at half term.
BMLSS Seals

At Kingston Beach I enjoyed great views and opportunities for photographs of the local Common Seal.

23 March 2019
A Common Seal was spotted on the shingle beach at Southwick. 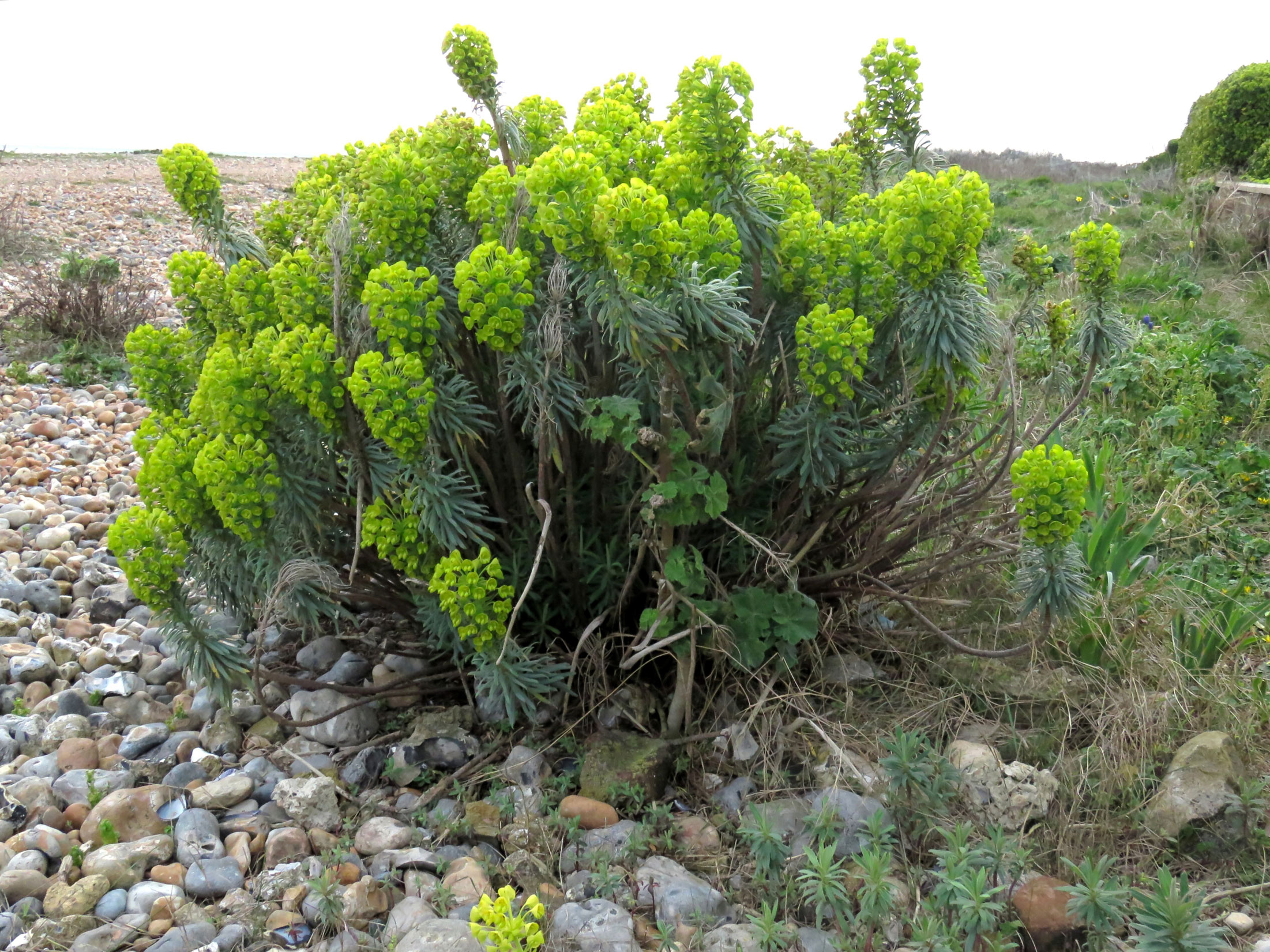 Spurge, Euphorbia, has escaped from the gardens and has begun successfully colonising the beach near Ferry Road, Shoreham. It looks reasonably attractive but it could become dominant. 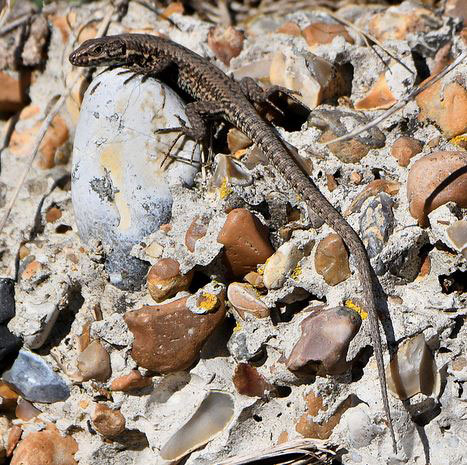 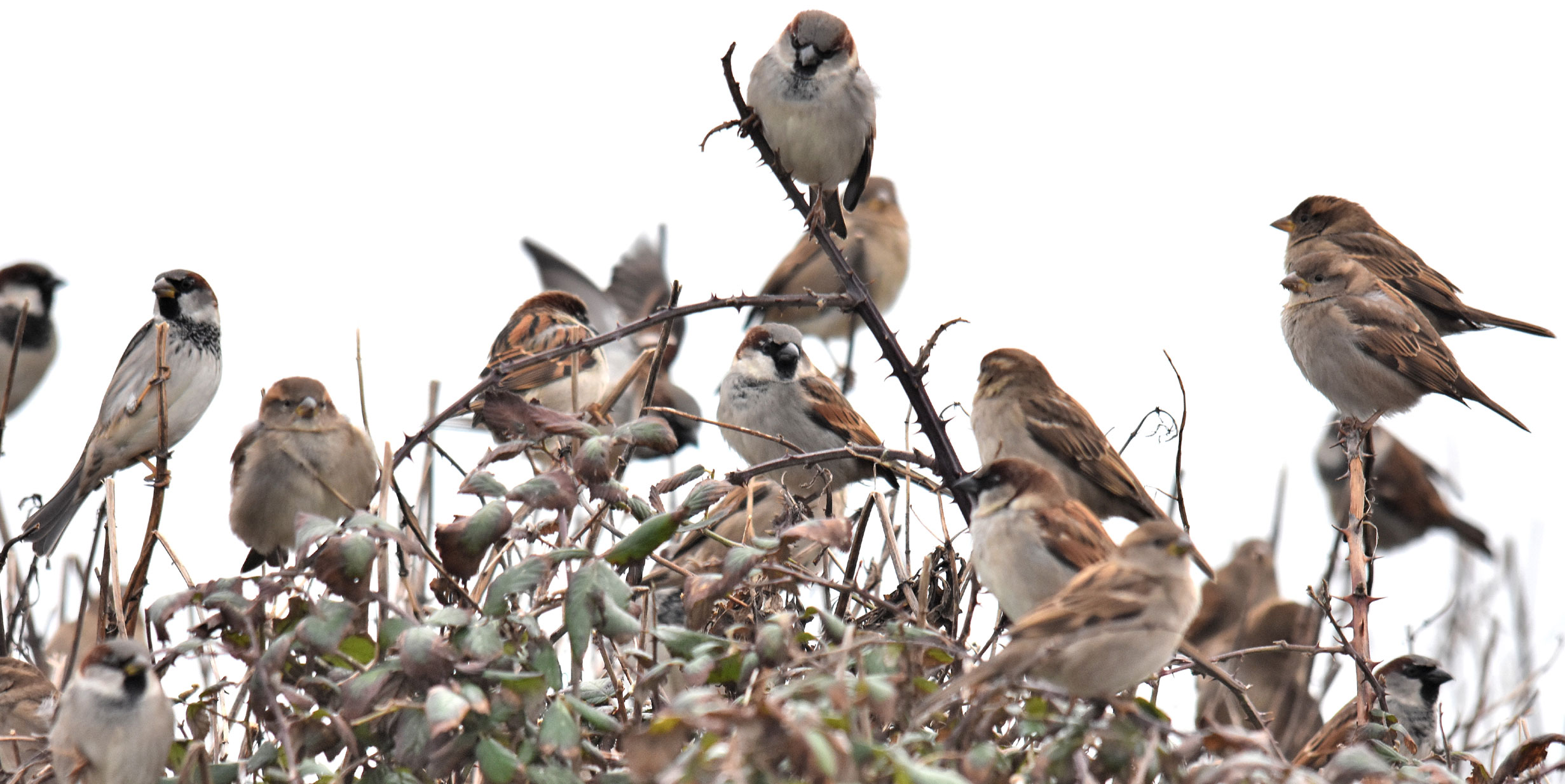 A crew of well over fifty (counted) House Sparrows congregated to feed on a vegetated part of Shoreham Beach to the east of the Church of the Good Shepherd on a misty murky day. 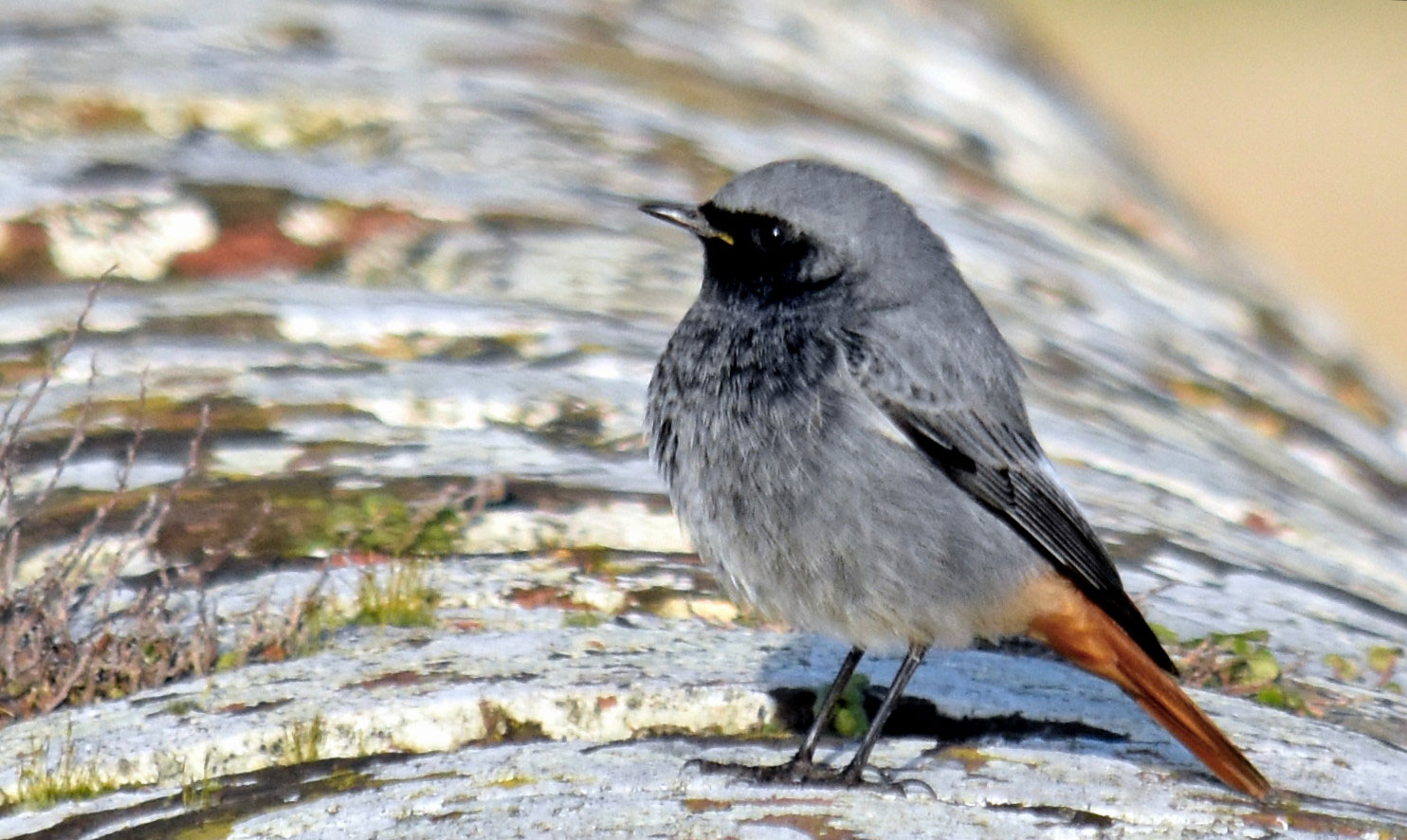 Making short flights on and around the carnot wall of Shoreham Fort, the male Black Redstart rarely kept still for more than a few seconds and it was very small in the viewfinder through the 500 mm telephoto lens.

Black Redstart originally inhabited stony ground in mountains, particularly cliffs, but since about 1900 has expanded to include similar urban habitats including bombed areas during and after World War II, and large industrial complexes that have the bare areas and cliff-like buildings it favours; in Great Britain, most of the small breeding population nests in such industrial areas. It will catch passing insects in flight, and migrants often hunt in coastal tide-wrack for flies or tiny crustaceans. Its quick ducks of head and body are robin-like, and its tail is often flicked.
Black Redstart (wiki)

The Black Redstart typically flicks from one perch to another and, as it does so, will momentarily reveal the glorious red plumage at the base of its tail. Black Redstarts are insectivorous and will be found in places where there is most insect activity. This is why rocky beaches are good places to look for them
Black Redstart (more info.) 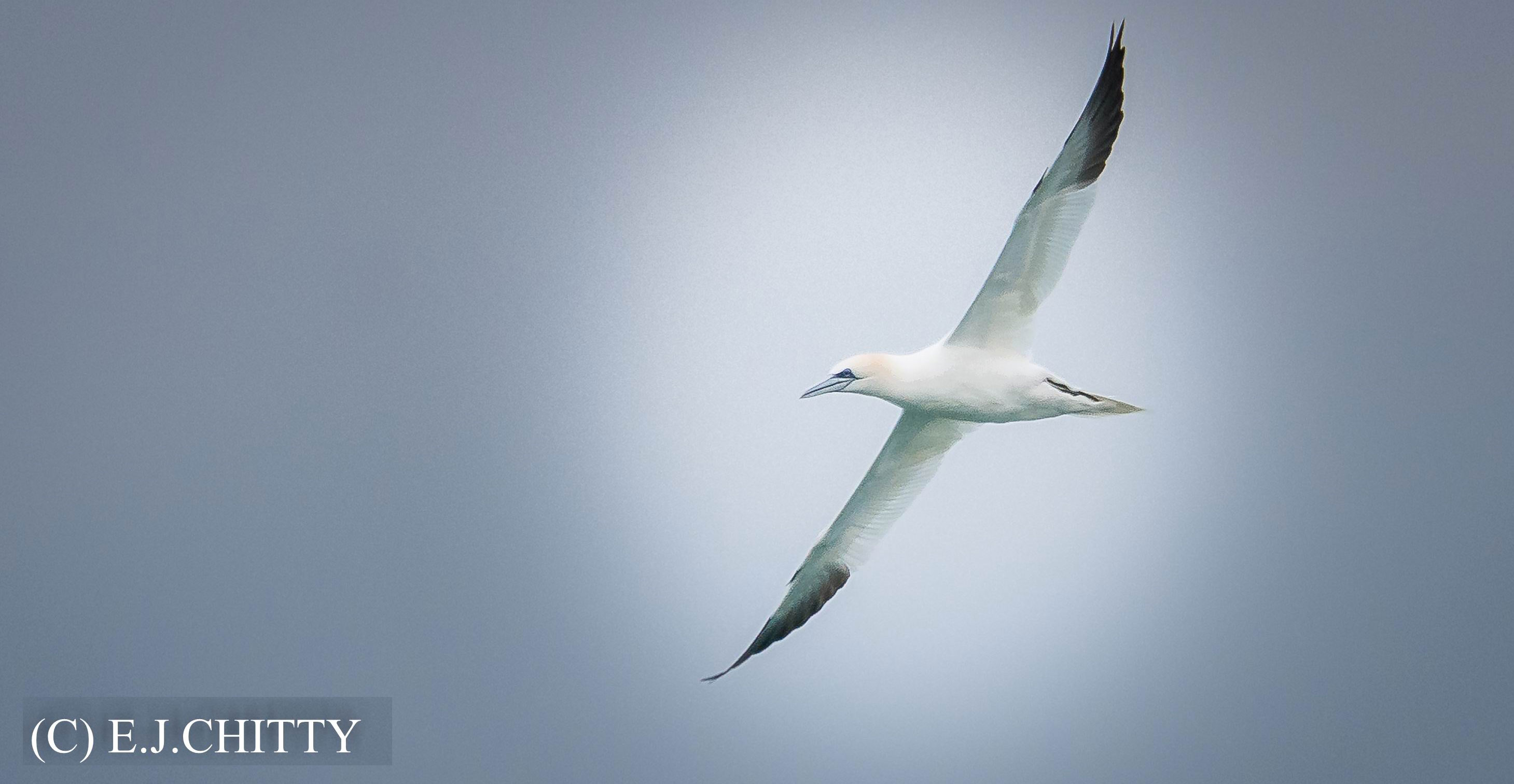 There were many Gannets just after nine in the morning between Widewater western causeway and Lancing Sailing Club, only 20-30 metres off the beach. I could hear them hitting the water!

In the afternoon, I located a shoal of fish by a patrol of over twenty Cormorants actively diving under the surface 100 metres off Widewater. They were accompanied by even more gulls. 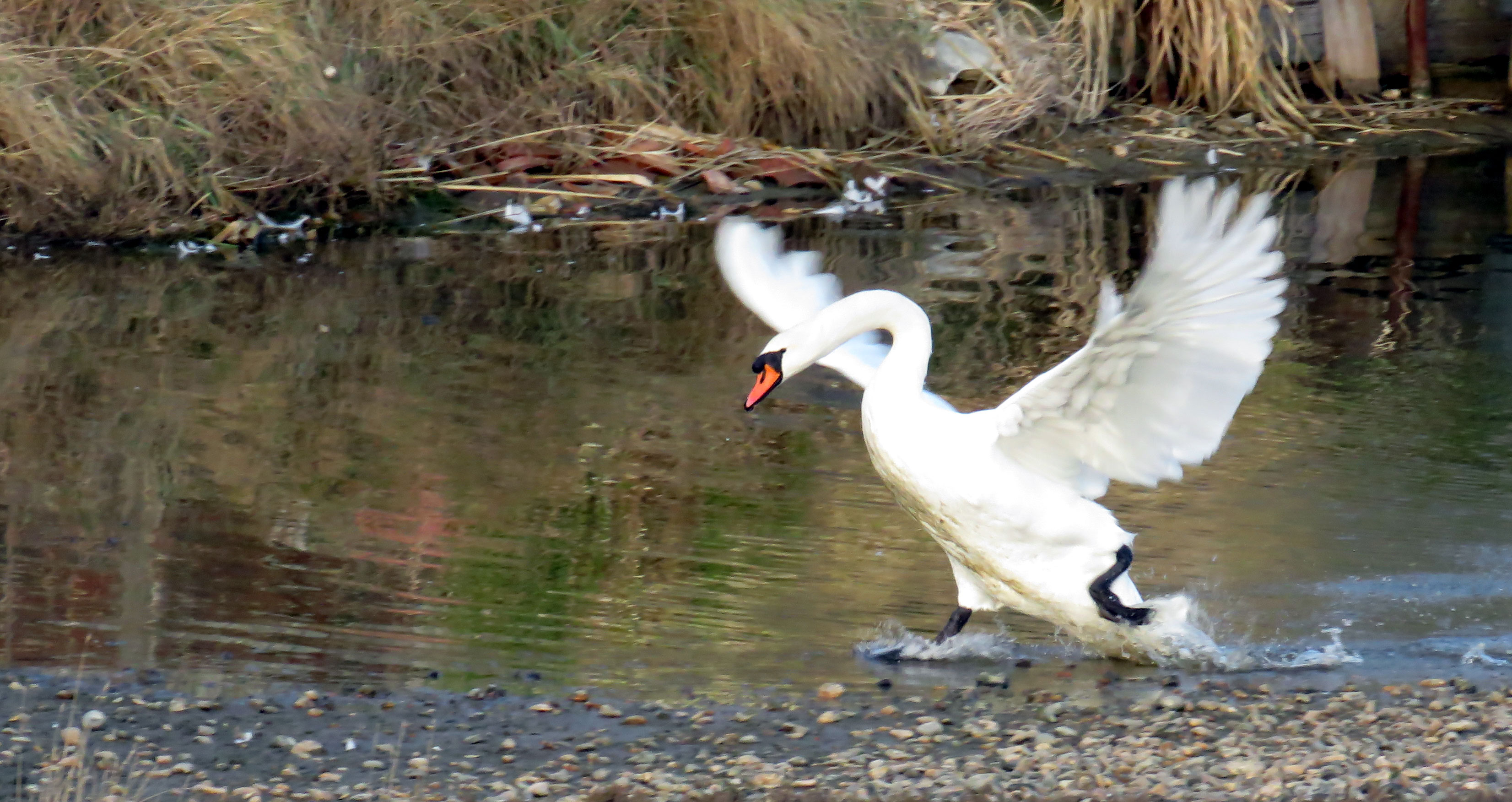 Two adult Mute Swans remained on Widewater, yet to chase away the three cygnets (looking like adults), offspring from last year.

7 January 2019
A company of over fifty Gannets have been seen diving into the sea after fish off Shoreham Beach where shoals of Herring have been reported. This solitary Parakeet visited gardens near Widewater. I am not sure if it is a visiting Ring-necked Parakeet or an escaped captive bird? 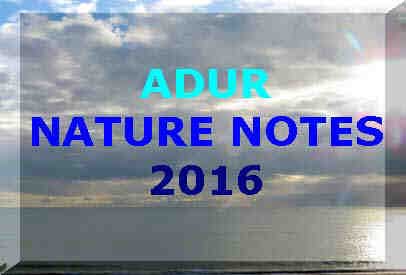