16 December 2008
A healthy young Fox was seen in the middle of the night on the Brunswick Road Railway Crossing Gates.

1 & 2 December 2008
Healthy adult Foxes were seen in the early evening in Shoreham one casually ambling across Middle Road near the Open Space.

22 November 2008
A brown Red Fox trotted throught the twitten from St. Mary's Church and stop in the middle of Middle Street in the mid-evening.

18 November 2008
A flock of about twenty Long-tailed Tits landed in a smallish leafless deciduous tree at the northern end of Rosslyn Avenue in  Shoreham town, and then they flew in a north-easterly direction over the Hamm Road Allotments before I could get my camera out.

2 September 2008
After the wettest August in my lifetime of over 50 years, Agaric mushrooms appeared in St. Mary de Haura churchyard in central Shoreham.


Speckled Woods were noted for their frequency (18+) at the top of Buckingham Park, Shoreham. This butterfly is not often seen on flowers but were repeatedly attracted to Lesser Burdock. There were two more of these butterflies on Mill Hill and more on the outskirts of Shoreham. White butterflies were everywhere in small numbers, notably four Green-veined Whites at the top of Buckingham Park and this was the most frequent of the whites on the day, although both Small Whites and Large Whites were also identified, most of these whites were not identified as they fluttered around much too quickly. Seven Holly Blues were seen in Shoreham town and the outskirts. Another surprise was a good condition Small Tortoiseshell on Buddleia at the top of the Drive, Shoreham.
Full Butterfly Report

4 August 2008
In the breezy conditions, a visit to the downs was contemplated but not undertaken because of the unfavourable conditions. Butterflies were frequent in Shoreham town and at the top of Buckingham Park amongst the Lesser Burdock and Stinging Nettles, both Large Whites and Small Whites were identified; both species were quite large and the identification was made by the greater amount of black on the wing tips of the Large White. However, the most prevalent white butterfly was the Green-veined White with at least six noted and there may have been more. There were also occasional Speckled Woods (4+) and a fresh lot of Holly Blues.

A Red Admiral Butterfly was seen at the top of The Drive, and a further one in the Butterfly Copse (next to the Waterworks Road), with a Gatekeeper Butterfly first recorded in the twitten between Corbyn Crescent and Adelaide Square, with a Volucella zonaria hoverfly, and another Gatekeeper noted on Buckingham Cutting south, with a Meadow Brown noted and at least three more Holly Blues and four Common Blues, including a female. A hurried passage trip down the Pixie Path produced two male Chalkhill Blues (one on the Mill Hill Cutting south-west) with four Common Blues in the long grass in the north-west corner of Frampton's Field, and 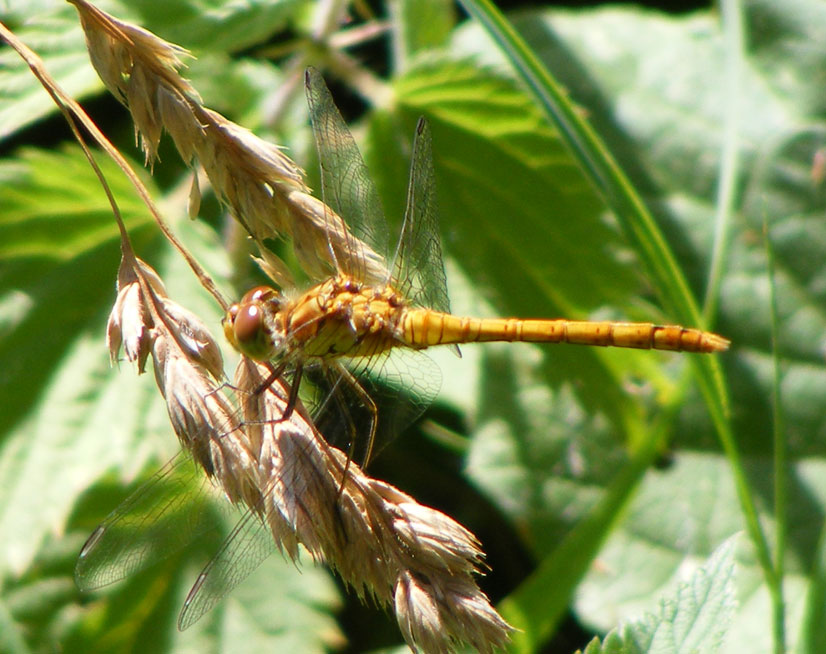 a few more Holly Blues. Finally, only my second Painted Lady of the year was a pristine butterfly in the twitten between Ropetackle and Victoria Road in Shoreham town.
A handful of Common Darters (dragonflies) were seen at the top of Buckingham Park and a Southern Hawker in the Butterfly Copse (next to the Waterworks Road).
Adur Butterfly List 2008

4 May 2008
My first House Martin of the year was spotted with two over the rooftops of a house in Corbyn Crescent in residential Shoreham. A single plant of Garlic Mustard was a suprise on the kerb, with Annual Wall Rocket now flowering more prolifically.

22 April 2008
My first Holly Blue Butterfly of the year was seen in Shoreham in the twitten from Victoria Road to Ropetackle at the eastern end by the main road.
Adur Butterflies: First Dates
Adur Butterfly List 2008

16 April 2008
A Jay flew over the houses on the north side of Gordon Road, near Gordon Avenue, in an area where I have never seen this bird species before. 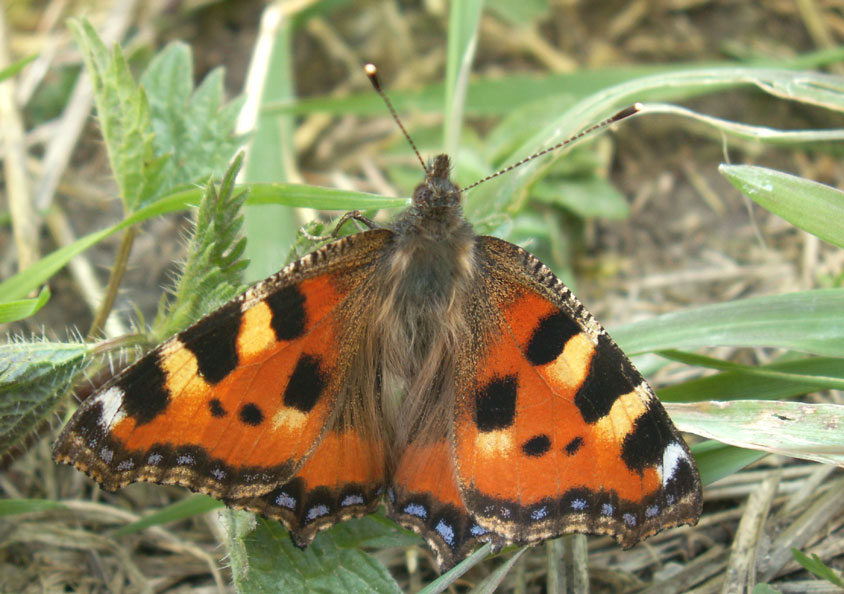 On a breezy afternoon, a Peacock Butterfly basked on the Waterworks Road with another one on footpath that runs along the south of Frampton's Field to The Street, with a pristine Small Tortoiseshell on Stinging Nettles, from which it may have just emerged after winter hibernation. The first two Common Bee-flies, Bombylius major, of 2008, buzzed around in the same area.
Adur Butterfly List 2008
Adur Flies 2008

9 April 2008
A Small Tortoiseshell visited a back garden in The Drive, Shoreham-by-Sea.

3 April 2008
A Small White Butterfly fluttered across the western end of Rosslyn Road in Shoreham town. This was first one I had seen in 2008.
Adur Butterfly List 2008

23 March 2008
After the pub closed at 10:30 pm on Easter Sunday, I saw a healthy Red Fox enter the churchyard of St. Michael in Southwick and ten minutes later another Fox was scrounging a morsel on the road verge outside Middle Road Open Space in Shoreham.

5 March 2008
A healthy adult Red Fox trotted across Gordon Road from south to north in the centre (halfway along) in a place where a Fox had been seen before. It was encountered about 9:00 pm.

25 February 2008
The first spawn of the Common Frog, Rana temporaria, appeared in my garden pond in Mill Hill Close, south of Mill Hill, first thing in the morning.

Report by Brian Drury on the Adur Valley EForum

21 February 2008
My first Common Frog, Rana temporaria, of 2008 was seen just before 7:00 pm, in darkness, on my front doorstep in residential Shoreham, a few metres from my small pond. The frog was a sub-adult (possibly an early frog in its first spring or a second year frog) and not a full grown adult frog. Frogs in Sussex are assumed to hibernate during the winter, although in all the mild winters this millennium, the hibernation period may have been brief.

We have seen a female (I think its female) Common Frog for about four weeks in the pond and now a small male has replaced the female. Lots of Smooth Newts, Triturus vulgaris, were seen in and around the pond in Mill Hill Close for the last two weeks.

13 February 2008
A Small Tortoiseshell Butterfly was seen flying about my mothers garden in Hawkins Close, Shoreham by Sea, in the early afternoon in good sunshine. This was the first local record of this species for 2008 and the first ever for the month of February, making five species seen locally in the second month of the year.

11 February 2008
A male Brimstone Butterfly settled on ivy on wall outside house in Mill Hill Drive, Shoreham at midday. This was the first local record of this species for 2008.

16 January 2008
At least a hundred Herring Gulls (with over 90% adult gulls) paddled for worms after the recent rain, on the greens adjoining Middle Road, Shoreham and Shoreham Grammar School playing fields.