Link to the Urban Reports for 2011

29 December 2010
Two adult urban Foxes with bushy coats and tails were chasing each other in Adelaide Square, Shoreham, just before mignight,

29 October 2010
A single Wood Pigeon was seen eating Holly berries from a tree at the north end of Ravens Road, in Shoreham, which was rapidly becoming denuded of its red berries to 50% of its crop.

22 October 2010
A Red Admiral Butterfly rose from a flower in the tiny front garden of 25 Western Road, Shoreham.
Butterfly List 2010

10 October 2010
The first one of two Large White Butterflies at the top of Buckingham Park, north Shoreham, flew rapidly from west to east, with one flying slowly and close enough to be postively identified. There was a clump of Common Ink Cap mushrooms at the top of the park near the top western entrance.
Full Butterfly Report

On the patch of grassland north of Brooklands, east Worthing (west of the Lancing border) the wildflower meadow creation contained a few White Campion, a few Corn Cockle, occasional Cornflowers, frequent Yarrow, a few Common Poppies and other meadow plants that attracted a Red Admiral Butterfly and a medium-sized brown moth or butterfly that fluttered away too quickly to be identified. Evening Primrose was flowering in a separate part of the open space.

6 September 2010
A single Red Fox would not be notable, but two young Foxes were playing in the rain in The Twitten, Southwick, just after 10:30 pm.

10 July 2010
The elusive White-letter Hairstreaks were discovered in Kingston Lane, Shoreham. Opposite the southern entrance to Shoreham Academy (formerly Kings Manor School) there is a long line of Elms on the east side of Kingston Lane (TQ 237 056). In the morning we saw two at the northern end of these Elms at about 10:00 am and then another about half way along. They spent the whole time flitting round the canopy though I did see one settled through binoculars. These are the first records of this butterfly on these web pages. Also a Small Tortoiseshell and then a first of the year Clouded Yellow in Phoenix Way, Southwick.

6 July 2010
Hedgehogs are out at night. One trotted across Middle Road in Shoreham, just before midnight.

5 July 2010
Over Chanctonbury Drive (SE of the bridge of the A27 to Mill Hill) there were two more Meadow Brown Butterflies and a surprise two Ringlet Butterflies in the location the latter had never been recorded before. The Ringlets settled high in the shrub canopy. At the top of The Drive, north Shoreham, a definite Green-veined White Butterfly was spotted followed by my first Red Admiral of the day.
Full Butterfly & Moth Report

27 June 2010
My first Hedgehog of the year was discovered curled up by the kerb in Dolphin Road, Shoreham, about 11:00 pm on a Sunday evening. This was a very dangerous road for a Hedgehog to be during the week.

25 June 2010
A Speckled Wood Butterfly flew over Ham Road by the Co-operative Supermarket in the built-up area of central Shoreham.

21 June 2010
At dusk a large moth was silhouetted against the sky amongst the rooftops in The Twitten in Southwick and this was thought to be one of the immigrant Hawkmoths. 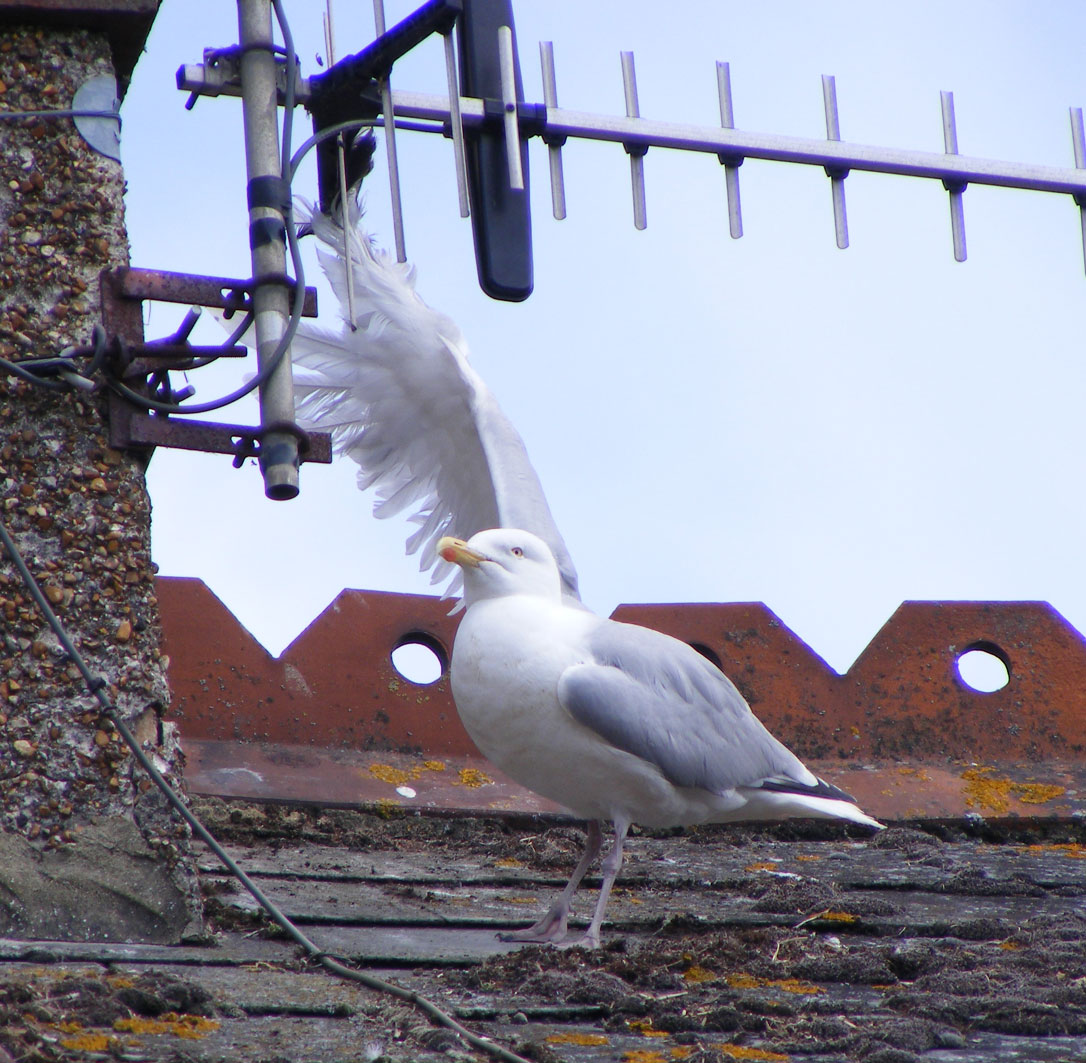 The South Downs Raptor Club had a display of captive owls at Buckingham Park, Shoreham which included the three British species.

18 June 2010
A Herring Gull managed to get its wing caught in a TV aerial in Gordon Avenue, Shoreham.

The first new flowers of the year were Self-heal and Hop Trefoil on the verges of Erringham Road, north Shoreham, followed by the first Bee Orchids on the verge in Mill Hill Drive.
Wild Flower List
Adur Orchids

10 -14 June 2010
Young healthy Red Foxes are seen every evening for five late evenings on the trot in Middle Road or Corbyn Crescent, Shoreham.

12 June 2010
An unidentified vanessid flew over the Continental Market in Brunswick Road, Shoreham, a Holly Blue Butterfly was seen in Mill Lane, Shoreham and a Large White over Shoreham town.

21 March 2010
At last I saw my first butterfly of the year: a Red Admiral flew around the bridge over the A27 to Mill Hill.


A Magpie performed an amazing feat of removing a large quantity of moss from the gutter above the Hair & Nail Lounge in the northern part of East Street, in Shoreham town centre, adjacent (east of) St. Mary de Haura churchyard. The debris was deposited on the pavement outside the shop. The handiwork (although using its beak) took six minutes (timed) as it proceeded from the south end of the gutter above the shop to the extreme northern end.

15 March 2010
A small expanse of the yellow Lesser Celandine was spotted in flower in the Adur Civic Centre grounds adjacent to (east of) the Duke of Wellington Public House in Shoreham.

13 February 2010
Hairy Bitter Cress was seen in ample flower, for this undistinguished plant, in the churchyard of St. Mary de Haura in central Shoreham.

5 February 2010
A few weak rays of sunshine were noticeable after a dreary start to the year, and the first clumps of Snowdrops flowered in the established self-sustaining colony under the tree cover in the wide twitten between Buckingham Park and Ravensbourne Avenue in north Shoreham.

2 February 2010
Fieldfares were still around, despite the disappearance of the snow. A small flock were seen amongst the bare Elms and at least two hopping along the ground in Portslade Cemetery. The air temperature reached 8.5 °C at 1:00 pm, but their was still ice on my plastic turtle test pond in my front garden.

January 2010
After the snow the urban Red Foxes, Vulpes vulpes, were seen more often than ever in the urban areas of Shoreham and Southwick after dusk, as many as three seen in different places in one evening. Typical locations were near St Mary de Haura Church yard in central Shoreham, crossing Gordon Road and Middle Road in Shoreham, in Kingston Buci in the vicinity of the church, anywhere around Southwick Green and at the western end of Croft Avenue, Southwick, near the Ship Public House. All of them seemed young and healthy and I noticed a distinctive large white spot on the tail of one in Kingston Buci.
The red fox is most commonly a rusty red, with white underbelly, black ear tips and legs, and a bushy tail usually with a distinctive white tip. (Wikipedia)

12 January 2010
A thin layer of snow laid over night, replacing the melted snow of the previous day. It was deeper than it first appeared, measured at 35 mm on the pavement outside my house in Shoreham. The night and day air temperature was fractionally above freezing.

14 January 2010
The snow and ice had disappeared on the roof tiles and pavements outside of my house in Shoreham.
Shoreham Weather 2010: Snow

Much of the loose packed snow melted quickly to slush by the early afternoon. There was a steady drip from the evergreen and for trees on which the snow had landed. After dusk, the temperature rose and by midnight almost all the snow had turned to slush.
cf. Chestnut Trees (1970s)

9 January 2010
Further snow fell in the morning reaching an accumulated depth of 20 mm on the Shoreham pavements. The temperature fell to minus 3.1 °C at 7:00 am. The wind was blowing partly from the west so where no snow landed in places sheltered from the east winds before (notably the twitten between Corbyn Crescent and Adelaide Square in Shoreham, which was previously bare of snow), there was now a notable layer of a a few millimetres.
Shoreham Weather 2010: Snow 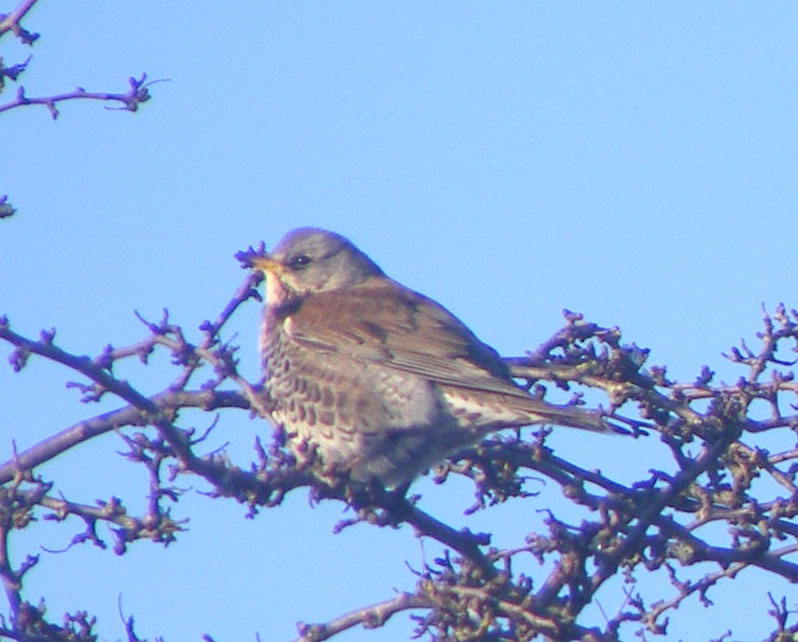 7 January 2010
A flock of about twenty Fieldfares visited North Farm Road in South Lancing feasting on the red berries of a Cotoneaster 'Cornubia' tree in the Hamblett's back garden. One of these northern thrushes was seen to gobble up three berries in quick succession.
In severe winters these birds move south and from the countryside into the parks and larger gardens.
RSPB Fieldfares

6 January 2010
A steady flurry of light snow blew in from the east in a Moderate Breeze (Force 5) but the air temperature remained just above freezing. The ground temperature must have been lower as the duration of the snowfall lasted for hours in the morning and a small amount of snow to 8 mm laid on the pavements of Shoreham.
Shoreham Weather 2010: Snow

3 January 2010
On the way home form the pub, a Red Fox trotted across Middle Road, Shoreham (at the Kingston Buci end) and this was the first wild mammal report of the year.