Reports received of Marine Creatures sighted, stranded or landed during 1999
A list compiled by Raymond Dennis

5/1/99
A Pilot Whale carcass was found washed up on the beach near Marazion, very decomposed,  with lower jaw missing and most of the tail end. Dolphin carcasses have also been reported at Church Cove and Poldhu beach near The Lizard.
22/1/99
The carcass of a fairly fresh looking female Common Dolphin was found on a South Devon  Beach. The few scars on her body did not look severe enough to be the cause of death. The  carcass is to be sent to London for post mortem examination to establish cause of death.
29/1/99
The carcass of a Pilot Whale was found today on the beach between Hayle and Gwithian.
29/1/99
Five young seals, aged from 3 to 5 months, that had been cared for by the R.S.P.C.A. in  Norwich after being found abandoned or injured as pups on the Welsh coast were returned   to the sea this week. They were taken back to the Welsh coast near to where they were found. It is important to return them to the area where they are born for seals on the other side of  Britain are genetically different and have resistance to different diseases. What is different  about these releases is that they have each been fitted with a little numbered yellow hat stuck  to their fur which hopefully will stay in place long enough for observers to see if they  successfully rejoin seal colonies.
29/1/99
It has been decades since Common Dolphins have been seen in the River Dart, but recently,  since last November, a pair have been seen regularly in the river often jumping clear of the  water. 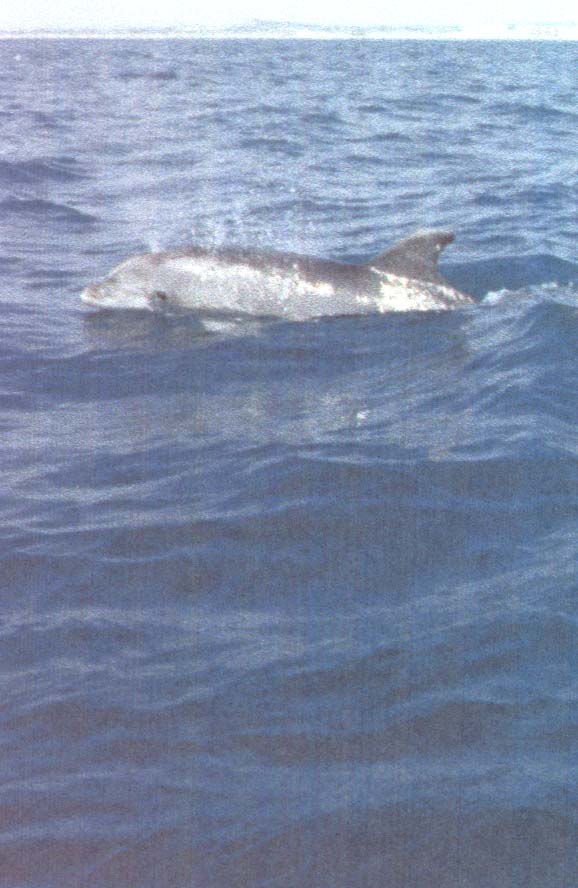 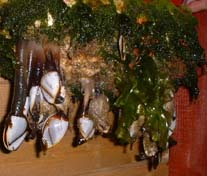 29/9/99
A dead Striped Dolphin was found at Marazion and taken for post-mortem.
30/9/99
A pod of 8 to 10 Bottlenose Dolphins were playing around a boat at the Hayle Bar, one with a damaged dorsal, probably Benty
30/9/99
A 7ft long Leatherback Turtle was seen about 200 yards off Penberth Cove
5/10/99
A pod of 15 Bottlenose Dolphins were accompanied by swimmers in Trevaunance Cove
5/10/99
A lone Porpoise was seen about ½ mile off Pendeen Head at 1030 hrs and later between 1200 and 1300 4 Rissos dolphins were seen 2 to 3 miles due north. An often seen white dolphin was in the pod.
5/10/99
A lone Bottlenose Dolphin breached and played around a Crabber fishing vessel off Tater-du at 1000hrs. It was a large adult 8 to 10ft long.
6/10/99
7 Risso's dolphins were seen 2  3 miles off Gwennap Head between 1030 and 1130. Several of these had white areas about the face.
6/10/99
A Killer Whale was seen off the Scillies from the Scillonian
6/10/99
A large pod of 18 to 20 Bottlenose Dolphins were still in Trevaunance Cove today.
7/10/99
Two Pilot Whales and several Bottlenose Dolphins were seen near the Isles of Scilly .
8/10/99
A pod of 6 Bottlenosed Dolphins were watched for 2 hours between St.Agnes and Cligga  Head during the day.
9/10/99
A pod of Bottlenose Dolphins were seen about 300 yards off Newquay.
10/10/99
A pod of 5 Rissos Dolphins were seen off St. Marys Isles of Scilly.
10/10/99
A pod of 8 Risso,s dolphins were seen from a boat off the Isles of Scilly at 1130. Several of these had white areas about the face and may possibly be the same pod as was seen off Gwennap Head on the 6th of October.
11/10/99
A single Risso's dolphin was seen in the tide race off  Cape Cornwall at Noon. It was very elusive and it is possible that there was more than one present.
11/10/99
Several Common Dolphins were seen off Kettle Point, Tresco. Isles of Scilly.
12/10/99
A small pod of at least two dolphins were seen about 3 miles South West of Gwennap Head at 0930. These were thought to be Common Dolphins.
12/10/99
In the first twelve days of this month about 200 Portuguese Man of War have been reported off Cornwall and the Isles of Scilly, many of which have become stranded on the beaches. The  potential danger of these creatures should not be underestimated for their poison is 75% the  strength of cobra venom,. The cobra would strike you once and await the outcome but the  Portuguese Man of War could sting you in several places at the same time with very  unpleasant consequences. If found stranded on the beach one should not approach them with  bare feet because even the broken off portions of their tentacles may be capable of inflicting a  wound.
18/10/99
Benty and his gang of 8 Bottlenose Dolphins were seen in the Fal Estuary between Mylor  and Falmouth Docks, at midday.
19/10/99
A pod of 8 Bottlenose Dolphins were seen between Gribben Head and Polkerris at 8.30a.m.
20/10/99
Benty  and his gang had moved into the Fowey Estuary and were seen playing with the ropes  of a dredger.
25/10/99
A single porpoise was seen about a mile off Pendeen Watch at 0800 hrs.
27/10/99
3 Porpoise were feeding in the tide race north of the Brisons off Cape Cornwall at 1245.
6/11/99
A dead, headless and decomposing Leatherback Turtle was found on Harlyn Beach SW8875
It measured 54 X 34
6/11/99
About 40 By-the-Wind-Sailors, Velella velella  were found stranded at Sennen SW3526
6/11/99
A pod of 10 to 12 Common Dolphins were reported at Trevanaunce Cove, St. Agnes, however if these were in the cove they would more likely be Bottlenosed Dolphins
8/11/99
Dead Grey Seals were found stranded, one at Porthtowan and the other south of Black Rock Widemouth Bay.
10/11/99
A pod of three Bottlenosed Dolphins escorted a sailing boat out of the river Yealm at 1430 all about 8ft long, two were agile and jumping about the other with a damaged dorsal, probably Benty, played by the boat.
11/11/99
A dead, but fresh Grey Seal was found stranded at Hawks Point SW538384, 4ft long.
13/11/99
Two Pilot Whales were seen near the Wolf Rock lighthouse. and 40 or more By-the Wind Sailors Velella velella, were found on Sennen Beach.
15/11/99
A pod of about 20 Common Dolphin were seen chasing a shoal of fish 2 miles south of Tater-du  at midday. They were moving at high speed and jumping high out of the water as they went.
19/11/99
Three Bottlenosed Dolphins were seen off Polzeath.
22/11/99
Three Bottlenosed Dolphins were seen off Porthscatho
26/11/99
Graham the Lifeguard at Porthmeor reported seeing a pod of 4 or 5 Bottlenose Dolphins off the beach.
1/12/99
A Whale was seen from MFV Defiant just north of Cape Cornwall and was thought to be a Minke
2/12/99
A 61 Porpoise carcass was found with some damage on the beach at Constantine Bay near Trevose Head
5/12/99
A 10ft Basking Shark was seen in shallow water at Lamorna SW4523.It barely broke the surface.
11/12/99
A carcass of a Minke Whale nearly 20ft long was found on the beach at Sennen SW359269
19/12/99
A grey seal was reported howling and barking about 8 miles off Trenow Cove SW531298 by a fisherman. I wonder if the fisherman had taken a closer look he might not have found a dog which had fallen overboard someone boat.
19/12/99
Four Porpoises were seen off The Brisons SW3431
19/12/99
A small pod of Fin Whales were seen spouting well off Carn Gloose during the morning.
20/12/99
At least 2 Porpoises were seen off Carn Gloose, may have been more in the pod.
21/12/99
At least 2 Porpoises were seen off Carn Gloose
28/12/99
3 Bottlenosed Dolphins were seen travelling eastwards toward Mounts Bay about a mile off Gwennap Head SW637215 at 1130 hrs.
28/12/99
There were many freshly stranded By-the-Wind-Sailors Vellela vellela found on the beach at Carbis Bay SW533388
31/12/99
A pod of unidentified dolphins were seen 100 metres offshore at Kennack Sands SW7316
at 1020.
31/12/99 Two male Grey Seals were seen at Stackhouse Cove SW548283 at 1320. They were far enough apart to be out of eye contact.