13 & 14 November 2007
Two Common Darters were seen, one on each day on the outskirts of Shoreham.

6 November 2007
Two Common Darters were seen, one in the Butterfly Copse near the Waterworks Road, and the other over the lower slopes of Mill Hill.

4 November 2007
A Common Darter settled on a fence post on the the Pixie Path to Mill Hill.

29 October 2007
A few Common Darters were seen over the Pixie Path and the lower slopes of Mill Hill.

18 October 2007
Common Darters were very frequently to be seen, notable with over fifty in total over the Pixie Path and Mill Hill. A lot of them had greyish-blue abdomens. There was one Southern Hawker flying over the Downs Link Cyclepath south of the Toll Bridge.

16 October 2007
There was a Southern Hawker flying over the Downs Link Cyclepath south of the Toll Bridge.

12 October 2007
One Southern Hawker and a few Common Darters were seen on the Downs Link Cyclepath south of the Toll Bridge.

1- 8 October 2007
A few Common Darters were seen every day just about everywhere on the outskirts of Shoreham, the Adur valley and on the downs.

Under an overcast sky, a cycle ride along circular route from old Shoreham up the Coombes Road to Botolphs and a return via the Downs Link Cyclepath was longer than usual because the South Downs Bridge was closed for repairs. Common Darters were frequent all along the route and there were a few Southern Hawkers over the Annington Sewer near Botolphs. 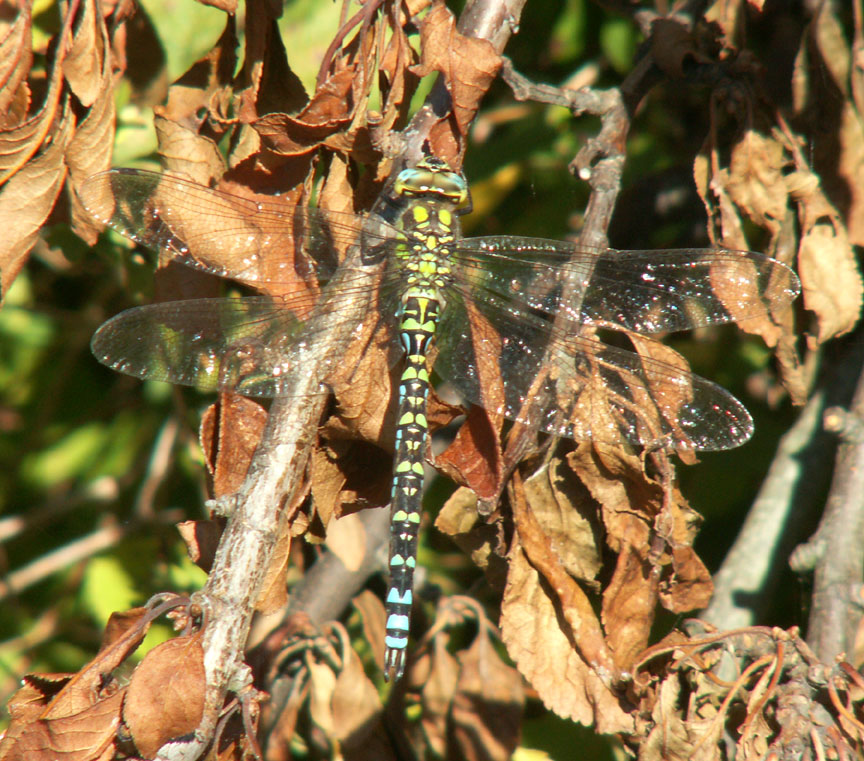 30 July 2007
A Common Darter and Southern Hawker were both seen on and flying over Mill Hill.

27 July 2007
One Southern Hawker flew north up Church Street, Shoreham. A dozen Common Blue Damselflies and one Ruddy Darter were all seen immediately over the Annington Sewer stream by the Oak tree at the northern boundary of the Salting's Field.
Adur Levels

24 July 2007
In a local Lancing garden with a large Carp pond, an Emperor Dragonfly stopped to rest on the Privet hedge I was about to cut. A few minutes later a Common Darter settled nearby.

Report by Ray Hamblett on the Lancing Ring Nature Notes

24 July 2007
On the the top long sward of the wildlife meadow north of the upper car park of Mill Hill, a Common Blue Damselfly flitted between the tall herbs. A Common Darter was silhouetted against the sky from the top of Mill Hill looking south.

17 July 2007
A Southern Hawker cruised along the Waterworks Road.

15 July 2007
A dozen Common Blue Damselflies, one Ruddy Darter and one Southern Hawker were all the first of the year for these damselflies and dragonflies. And they were all seen immediately over the Annington Sewer stream by the Oak tree at the northern boundary of the Salting's Field, east of Annington.
Adur Levels

1 July 2007
My first Common Darter(dragonfly) of 2007 was spotted on a Buddleia on the Downs Link path south of the Buffer Stop in Shoreham town.

They would not stay still for more than a second and then they usually rested briefly deep in amongst the Stinging Nettles.

5 June 2007
A flash of orange and now there were two female Broad-bodied Chasers (dragonflies), Libellula depressa, seen on the southern part of the Slonk Hill bank over the vegetation bordering the path.

4 June 2007
My garden pond (in Portslade) was alive with Blue-Tailed Damselflies in the morning. My best count was thirteen. This does not count three immature damselflies that had just hatched from larvae on the Iris stems. These were still a creamy white colour.

Report by Steve Savage on Adastra

22 May 2007
A large dragonfly patrolled the bottom scrub on the lower slopes of Mill Hill. I could not see what species, but it was not a Broad-bodied Chaser and it was probably a Hairy Dragonfly, Brachytron pratense, and its appearance fitted. There was an unidentified blue damselfly over the drainage ditch/stream to the north of of Cuckoo's Corner (TQ 202 067).

May 2007
A Beautiful Demoiselle, Calopteryx virgo, was seen in a Shoreham garden where there are only very small pools.

I saw my first dragonflies of the year patrolling along a stream north of Cuckoo's Corner (TQ 202 067). Patience was rewarded with a view of what appeared to be a Southern Hawker. Aeshna cyanea. However, David Kitching on UK Dragonflies (Yahoo Group) thinks it was much likely to be a Hairy Dragonfly, Brachytron pratense, and after thinking about the two dragonflies seen (smaller than the familiar Southern Hawker) I feel that this is the correct identification. This is indicated by the early flight time and behaviour as well. This is the most reliable record of the Hairy Dragonfly on these Nature Notes web pages. This is described as a rare species in Sussex, but there appear to be quite widespread and frequent records. It is recorded as Nationally Scarce.
Cheshire Damsels and Dragonflies 2007
Full Report

Comparison of pronotums of blue damsels