(shown in the Plan as Section 1)


25 July 2007
In the scrub in the north-west of Mill Hill there were a few Gatekeepers, Meadow Browns and a Red Admiral. A Wall Brown Butterfly settled on the chalk path near the gate to Old Erringham. I returned by the quickest route along the ridge.

4 July 2007
On another breezy (Force 6) overcast day when butterflies were generally not flying, a few Meadow Brown Butterflies, a Gatekeeper and a Small Tortoiseshell and a Comma were seen in the scrub of the north-west of Mill Hill. Field Scabious was noted in flower. A Common Lizard was seen under a piece of roofing felt deliberately laid down in the central mixed scrub and grass area near the northern perimeter. Its middle was plump, presumably with its viviparous young.
Full Butterfly Report

12 April 2007
Ground Ivy was seen amongst the scrub in the north-west part of Mill Hill. However, in many places the new growths and older growths of Dogwood were obscuring everything.

28 March 2007
Ground Ivy was seen with the Sweet Violets in the scrub in the north-west part of Mill Hill. There were no bee-flies to be seen. A Peacock Butterfly flew over.

21 March 2007
Basking on Footpath 3138 (as it winds its way through Mill Hill amongst the first bit of Hawthorn scrub to the north of the lower slopes) I clearly saw my first Small Tortoiseshell Butterfly of the year. It was an orange variety which I think are local broods. It was closed at first and then opened one wing and flew off quickly. I saw and heard a pair of Long-tailed Tits aongst the Hawthorn in this area.
Adur Butterfly List 2007
Adur Butterflies: First Dates


12 October 2006
A Peacock Butterfly settled on the path but flew away upwards before I got close enough for a photograph. There appeared to be few (15+ over the whole of Mill Hill) moist cow pats (possibly made by horses?) on the paths, but there were no cattle to be seen on Mill Hill.

15 June 2006
The bumblebee mimic hoverfly Volucella bombylans var. bombylans with an orange tail was seen along the path that is becoming overgrown with Dogwood in parts in the north-west part of Mill HillNature Reserve. There was a large patch of Ground Ivy with Germander Speedwell. Both plants have small flowers in the purple-blue colour.

10 February 2006
The temporary metal barrier has been reinstated and the cattle cannot get on to Mill Hill by the stile (in the north-west). The cow pats were still there on the paths. They were still moist and they were a thorough nuisance (as was dog's mess as well).

1 February 2006
The cattle have been removed from the "lambing field" or intermittent pasture to the south-east of Old Erringham Farm and will not now venture on to Mill Hill. This is probably because the grass on the land has now been grazed to its optimum and is best left for the spring growth. This pasture is of no butterfly value although the fringes may contain the occasional wild flower.
January Cattle Report 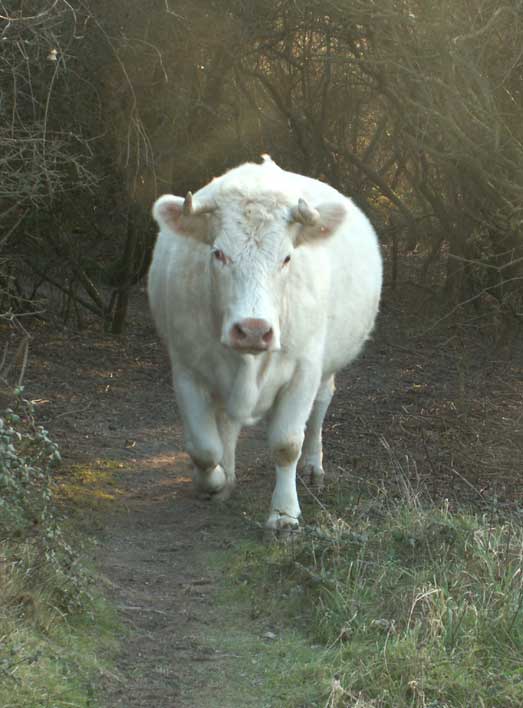 30 January 2006
There are cattle all over Mill Hill from Old Erringham Farm enriching the low nutrient hillsides with their dung and threatening the flora (Horseshoe Vetch) and the internationally important population of Chalkhill Blue Butterflies. It looks like the fence was broken down deliberately, probably at the instigation of the South Downs Conservation Board on public land given to the people of Shoreham. There is also the danger or erosion, breaking up the steps under the hooves of the cattle and reduction of the amenity value of the downs. They were timid cattle and they were shooed of the vulnerable lower slopes by the public. Most of the dung was on the steps near the stile in the north-west corner of Mill Hill Nature Reserve.

17 October 2005
Common Wasps were frequent around the Ivy (near the stile in the north-west corner) much more than in the previous years this century.

27 September 2005
The Fresh Breeze Force 4 (at 24 mph bordering on Force 5) from the south-west (224° azimuth) felt stronger and more from due south. This wind may or may not have brought immigrant Red Admirals to Shoreham. To my surprise at least nine more on a single clump of Ivy near (just south of) the stile in the far north-west corner of Mill Hill Nature Reserve. There were also two Meadow Browns and two Speckled Woods around the same Ivy.

4 September 2005
There was Honey Fungus Mushrooms ( a pest species of trees) on the Hawthorn scrub immediately to the north of the lower slopes of Mill Hill. In the same  Hawthorn scrub, at least two Speckled Woods fluttered over the path before I returned via the ridge (so I was only the scrub for about three minutes).

These insects were discovered in the Hawthorn wood/scrub in the north-west of Mill Hill. The first wasp was quite small.
The social wasp (Vespidae) is a worker Dolichovespula sylvestris, a common social species which is often found at this time of year.

Identification and comments by George Else on the on the Bees, Wasps and Ants Recording Society Yahoo Group
Adur Bees and Wasps

The multiple-legged insect, a larva (not a centipede), was crawling towards the right of the photograph. It seems to have eleven segments. It was crawling over the path between the northern end of the lower slopes and the stile. It may be a beetle larva. It estimated length is 25 mm. This may be the larva of Drilus flavescens, which is frequent on the downs in southern coastal areas.

I think this must be a Drilus larva. It looks just like the diagram in Westwood's book. (Richard Jones)

2 August 2005
It was in this area that the spectacular (by fly standards) hoverfly Volucella zonaria was seen. By the stile there were at least ten Chalkhill Blue Butterflies and a Peacock Butterfly over the other side of the barbed wire on Erringham Hill.

1 May 2005
In a recently cleared area in the north-west of Mill Hill, two male Orange Tip Butterflies fluttered by, only pausing to nectar on the common Ground Ivy for less than a second. The white butterflies were two Small Whites.

27 April 2005
A Peacock Butterfly displayed in a cleared part of the scrub, with planty of blow-flies including the Grey Flesh Fly Sarcophaga, and the undistinguished fly Tilius elongatus.

22 November 2004
In the scrubby area of Hawthorn in the north-west of Mill Hill Nature Reserve, a small yellowish mushroom was spotted in the area cleared by the South Downs Conservation Board.

As this species was growing out of the soil it is thought to be Mycena flavescens. There is a similar species Mycena arcangeliana which grows on wood.

ID by Jean J Wuilebaut on Fungi of the British Isles (Yahoo Group)
Welted Thistle was still in flower.

25 October 2004
The normal long journey through the scrub involves a trek down the path through the lower slopes to the stile, and then the climb following the path to the northern edge (turn left at every junction) until the path veers around to heading east parallel with the arable field which is Erringham Hill. Then at the first path on this uphill (lesser gradient than before) bit that branches south through the glades of long grass due south into the area I have christened the Triangle. I then turn east and veer north to regain the path and enter the copse (proper small wood with Corsican Pines and Italian Alder at the top of Mill Hill) and follow the tarmacked trail around until it opens up to a long grass meadow north of the upper car park.

The wooden steps are appreciated as it would have been too muddy and slippery to climb the path without this terracing. There was nothing of note except that the thistleabove looked slightly different from the normal species.
Adur Thistles

14 October 2004
I did not venture into the Hawthorn scrub/woodland, but just traipsed the short distance from the lower slopes to the stile and back again, noticing that a White Campion was still in flower by the path.

In the a cleared area of scrub in the north-west of Mill Hill Nature Reserve, there were a few small mushrooms on a stump. They were only small, at most 25 across their sticky caps.

There was also my first record of a distinctive snail, a tower-like mollusc, on Mill Hill. These snails were expected but I had not seen them before on Mill Hill proper. This tower-like snail is probably Cochlicella acuta. This is reported as a coastal species only.
More Information on the Snail
Fungi of Shoreham

24 September 2004
The following plants were noted adjoining the path as it winds its way through the Hawthorn wood:

Other plants noteworthy were a few patches of Hound's-tongue, Cynoglossum officinale, (not illustrated) not in flower, and present in the cleared patches with lots of other early colonisers. 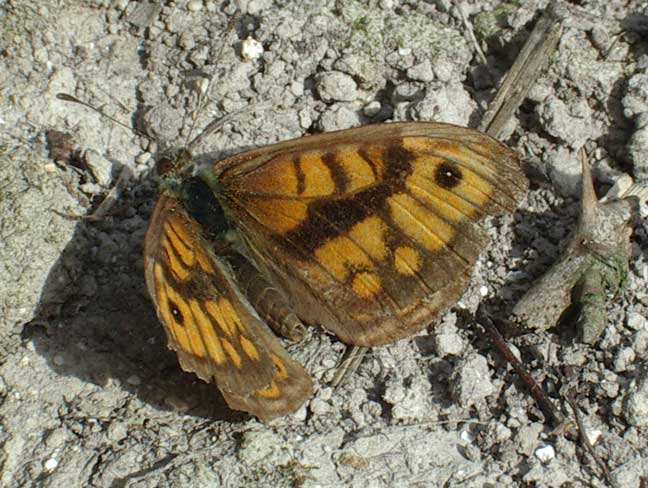 2 September 2004
I surprised a male Emperor Dragonfly in the scrub in the north-west which too flight rapidly.
Adur Dragonflies

22 August 2004
A female Emperor Dragonfly cruising just above head height was the highlight, but there was a Wall Butterfly and at least a full dozen Speckled Wood Butterflies.

21 June 2004
Garlic Mustard has been identified by the steps in the north-west corner near the stile leading the footpath through Old Erringham Farm. At least the plant in the photograph has been identified as such, but there is some doubt. At least half a dozen Speckled Wood Butterflies were seen in the shady scrub.

13 June 2004
Nectaring in the Old Erringham grazing land to the north of Mill Hill, there were several male Common Blue Butterflies and this usually barren pature had Common Milkworts, Bird's Foot Trefoil, Eyebrights and Hawkweeds in flower. In the Hawthorn copse that dominates the northwest corner of Mill Hill Nature Reserve, a half a dozen Speckled Wood Butterflies fluttered and then settled. There was just a single Red Admiral Butterfly.

10 May 2004
In the scrub in the north-west of Mill Hill Nature Reserve there were a handful of Brimstone Butterflies and at least one Speckled Wood Butterfly.

26 April 2004
In the scrub in the north-west of Mill Hill there were two Speckled Wood Butterflies and a single Peacock Butterfly.

15 April 2004
A Peacock Butterfly settled on some bare earth amongst the Hawthorn scrub. The following plants were in flower amongst the undergrowth: